In an end-of-year science round-up we update two genetic stories that have previously featured on Our Changing World. 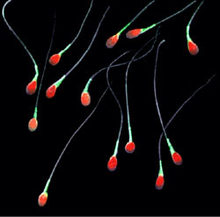 It’s well known that as women age their ability to become pregnant declines, and the chance of having complications and giving birth to babies with conditions such as Down’s syndrome increases. Then, with menopause, a woman’s fertility ends.

But what happens with male fertility as men get older? Yes, older men can still father children, but is their sperm as good as it was when they were younger? Until now there’s only been anecdotal evidence that suggested that the quality of sperm declines with age.

A new meta-analysis of 90 individual studies, published in Ageing Research Reviews, has confirmed that sperm quality and quantity do indeed decrease with increasing age. Semen volume and sperm performance - the sperm’s ability to swim in a forward direction – decline, and there is an increase in malformed and DNA-damaged sperm.

Lead author Sheri Johnson featured on Our Changing World earlier this year talking about her Marsden-funded work on aging zebrafish fathers. The results of that study showed that although sperm quality declined in older males, who also got fewer matings than younger males, their offspring were getting some survival advantage and more were surviving to adulthood than those fathered by younger males.

This new study on male fertility was co-authored by Neil Gemmell, who featured on the programme recently talking about mapping platypus and tuatara genomes, and the Trojan Female idea of pest control. 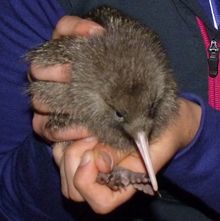 A little spotted kiwi chick that has just hatched and emerged from the nest burrow for the first time. Photo: Judy Briggs

At first glance numbers of little spotted kiwi at Zealandia Sanctuary in Wellington and on Long Island in the Marlborough Sound seem to be going gang-buster. The population on Long Island is increasing at about 8% a year, as most pairs are producing two clutches of two eggs each year. But this initial good news hides a dark genetic secret: the birds on Long Island are all descended from a single pair of kiwi, and the resulting lack of genetic diversity is having a big impact on the survival of the second generation. The original pair, and the first generation, which comprises pairs of birds that are all brothers or sisters, are breeding well. The problem kicks in for the second generation onwards, when suddenly fertility and egg and chick survival decline markedly.

Little spotted kiwi at Zealandia, on the other hand, are descended from an initial population of 40 birds, and as a result they have the most genetic diversity of any population outside of the founder population on Kapiti Island. Although they produce fewer eggs each year than the Long Island birds these eggs are much more likely to hatch.

Researcher Helen Taylor, who has just completed her PhD looking at the impact of inbreeding in the two populations, says that kiwi are long-lived birds and if population size alone had been used as a measure of success it would have given a very misleading picture. The genetic bottlenecks created when small number of birds were moved to establish new populations build on a previous genetic bottleneck in little spotted kiwi:every one of the 1700-or-so birds alive today is descended from just five birds that were moved to Kapiti Island.

Helen, who now has a post-doctoral position at the University of Otago, featured on our Changing World in a story about her field work in the Zealandia Sanctuary.