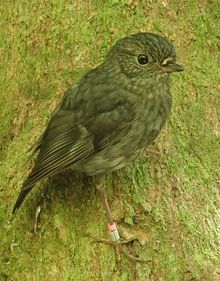 North Island robins are the perfect test subject for a study looking at cognition in wild animals. They can be very easily trained to do tasks in return for a food reward, and their nesting success can be easily followed. Photo: RNZ / Alison Ballance

“Food is the way to a robin’s heart” - Rachael Shaw.

Biologist Rachael Shaw has exploited the small North Island robin’s penchant for meal worms by using them as an enticement to take part in a series of Avian Mastermind. But while the 20 male robins that live in the Zealandia Sanctuary willingly took part in Rachael’s bird IQ tests were all keen participants, not every one of them was a bird brain. Tesla – a bright spark as his name would suggest – performed well, while Darcy (an Austen-inspired naming) came near the bottom of the class.

Rachael Shaw, who won a prestigious Rutherford PhD Scholarship in 2008 to study for her PhD at Cambridge, is now a Rutherford post-doctoral fellow at Victoria University of Wellington. Testing the IQ of robins is part of a Marsden-funded research project to find out whether it’s possible to test cognition in a wild bird, and relate the bird’s cognitive ability to its breeding success. This year was the first of what will be a 3-year study.

“The aim of this year was really to develop and see how well the birds could perform tests that have only ever been done in a laboratory before,” says Rachael. “And as it turns out robins quite nicely adapt to doing tests that would normally be impossible with a wild animal. So they voluntarily come and participate, which is really nice.”

Rachael Shaw is finding out how smart North Island robins are, using a series of intelligence tests that involve a reward of a meal worm, in return for flipping over lids bearing different symbols. Photo: RNZ / Alison Ballance

The six tests that Rachael use include learning to flip small lids to find a food reward, a colour association test in which they learn to associate a reward with a particular colour, and then a reverse colour test, in which they have to learn that the reward is now under a different colour lid; this tests their learning flexibility. There is also a symbol association test, which tests how long it takes a bird to associate a particular symbol (a cross or a square) with a food reward. This is a measure of the bird’s learning speed, and is a task that has been used with many other species. The bird is presented with a 6-well tray, containing a mealworm hidden under one of two lids, and if it flips the correctly marked lid it gets the food reward. Because the birds have a good spatial memory Rachael continually shifts the location of the lids and reward. The birds have to flip the correct lid 10 times out of 12 trials before Rachael is sure it has learnt the task.

Rachael has been following the nesting success of the robins that took part in the trials, to see if there is any correlation between a bird’s intelligence and its success in producing offspring. Robins can produce up to three clutches per breeding season, and they have just completed their first clutches of the year. Rachael is interested to follow where the chicks disperse to when they leave the nest, and is asking residents in the suburbs around Zealandia to tell her if they see robins wearing green-metal leg bands. She wants to run the chicks through the intelligence tests, to see if smart parents have smart chicks.

Rachael's 2013 Marsden-funded project is called 'The evolution of intelligence: evaluating the heritability and fitness consequences of cognition in wild North Island robins'.

In earlier Our Changing World stories on robins we heard about a study on Tiritiri Island and about robins living in a pine plantation near Dunedin.

Listen to the story about testing robin intelligence below.