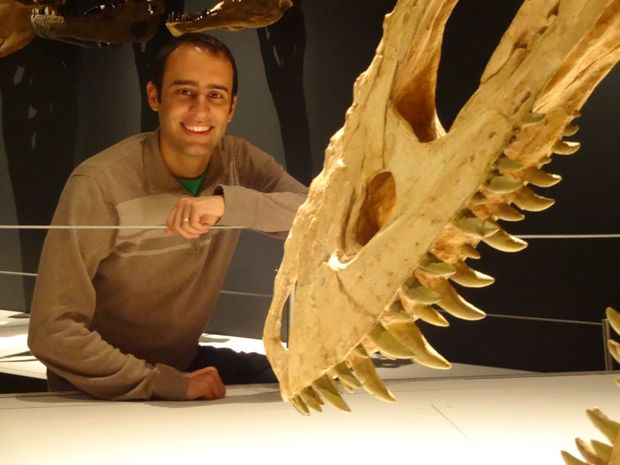 Palaeontologist Stephen Brusatte with a long-nosed tyrannosaur from the Alioramus genus, which is on display in Te Papa's Tyrannosaurs: Meet the Family exhibition. Photo: RNZ / Veronika Meduna

Mighty Tyrannosaurus rex may be the most famous member of the tyrannosaur family, but these ferocious predators came in all shapes and sizes.

Earlier this year, palaeontologists announced the discovery of the latest T. rex cousin, the small and long-nosed Pinocchio rex, which roamed the wilds of what is now China more than 66 million years ago, at the same time as T. rex was chasing its prey on the north American continent. 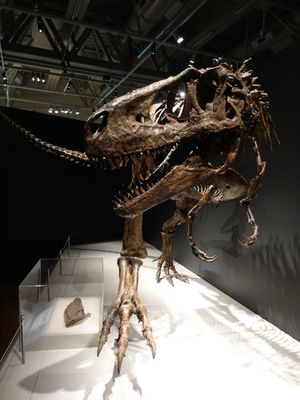 University of Edinburgh palaeontologist Stephen Brusatte, who is a world authority on tyrannosaur origins and evolution and was part of the team that described the new tyrannosaur in the journal Nature Communications, says the fossil bones were unearthed during construction work in southern China.

Previously, two other fossilised tyrannosaurs with elongated and slender heads had been found and described as Alioramus altai (above), but they were juveniles and it was unclear whether they were from a new class of dinosaur or simply at an early growth stage. It wasn't until the discovery of Pinocchio rex - a nearly complete skeleton of an adult specimen - that it became clear that these tyrannosaurs represent a new branch of the family tree.

Pinocchio's official name is Qianzhousaurus sinensis, and Stephen Brusatte says it breaks the mould in many ways. Although it has the familiar toothy grin, it doesn't have the deep skull that gave T. rex and its Asian counterpart Tarbosaurus bataar (right) their extreme bite force. It was a big meat-eater, just like T. rex, but it was smaller, less bulky and probably faster on its feet.

'You still would not want to run into Pinocchio rex down some dark alley in the Cretaceous. It would have ripped your head off, but if you stick it up next to T. rex it looks a bit like a dwarf.' _Stephen Brusatte

The differences in skull shape and body size probably meant that different tyrannosaurs chased different prey. "The big tyrannosaurs, probably top of the food chain, could eat what they wanted. Pinocchio rex would have relied a little bit more on speed and stealth, rather than on brute strength."

Examples of Alioramus, the juvenile long-snouted tyrannosaurs, and other members of the family, are on display at Te Papa's Tyrannosaurs - Meet the Family exhibition until February 8.

Listen to the interview above for a tour of the exhibition with Te Papa palaeontologist Alan Tennyson.