“It’s sort of like taking a telephone directory, shredding it and then shredding it again, then sticking it in a blender, throwing it up in the air and then trying to put it all back together again. It’s difficult and you make a lot of errors, but the broad pattern that emerges is generally reproducible and we can get an idea of what the genome looks like.” Geneticist Neil Gemmell on using next generation gene sequencing to map a genome. 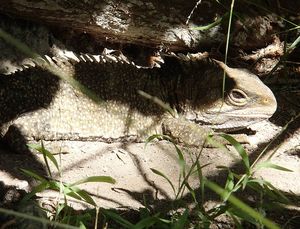 A project to map the genome of the tuatara is being carried out by the Allan Wilson Centre for Molecular Ecology and Evolution. Photo: Alison Ballance

New Zealand’s tuatara is the only surviving member of a reptile family whose lineage dates back more than 250 million years. The platypus is one of a handful of unusual, venomous, duck-billed egg-laying mammals found only in Australia.

Geneticist Neil Gemmell, from the Allan Wilson Centre for Molecular Ecology and Evolution and the University of Otago, says the genomes of both these animals are important for shedding light on the evolution of vertebrates. The platypus genome project arose, he says, from a desire to “understand ourselves better by understanding the evolutionary history of mammals.”

“We wanted to understand what was shared,” says Neil Gemmell. “What were the ancestral features of all mammals, that were shared by marsupials, placental mammals and monotremes? And the best way to do that was to sequence the genome of representative monotreme.”

Neil’s role was to look at tandem repeat sequences of base pairs, such as AGAGAG. “We wanted to find out how much of the genome was made up of those repeats, whether the nature of those repeats was similar across all mammals or whether they differed, and where these repeats were. Were they at the start, middle or end of genes, or between genes.”

The platypus genome was compared to the human genome, a chicken, a marsupial and a lizard genome.

“And what we found,” says Neil, “Is that these repeats had a pattern in platypus that was more like that of chicken and of lizards, than it was to some of the mammals. So it had relatively few repeats, and the repeat structure and sequence were a bit more like those ancestral vertebrates.”

A draft sequence of the platypus genome was published in Nature in 2008. Since then genetic techniques have advanced rapidly, and next generation techniques now make it possible to sequence genomes much more rapidly and cheaply. However, the tuatara genome - which is that of a single male tuatara from Lady Alice Island in the Hen and Chickens island group -  is proving a difficult one to sequence.

“The tuatara genome is far and away the hardest genome we’ve tried to put together so far,” says Neil. “This is a really big genome, and big genomes are hard. So humans are about 3 billion base pairs of information, and tuatara’s at least 5 billion. You could probably do ten or even a hundred human genomes more easily than try to sequence the genome of a tuatara.

The project has been progressing slowly, and Neil says they’ve reached a stage where the average “piece of the phonebook is about 1 million base pairs long.” The limitation to the work is the size of the supercomputer available to carry out the calculations.

Neil says it’s still early days, and the work to date “just confirms what we already knew, which is that tuatara are different from everything else.”

You can read more about the tuatara genome project on their blog site. The project is a collaboration between The Allan Wilson Centre for Molecular Ecology and Evolution, The University of Otago, Ngatiwai, New Zealand Genomics Ltd and the Genome 10K consortium.

Neil Gemmell spoke with Kathryn Ryan on Nine to Noon when the project started in mid 2013.

Our Changing World spoke recently with Alison Cree from the University of Otago about her tuatara research in Orokonui Ecosanctuary. Alison is the author of the new book “Tuatara: biology and conservation of a venerable survivor.”