By day, Michelle Dickinson runs New Zealand’s only nano-mechanical testing laboratory at Auckland University. By night, during the weekends, and increasingly during her already busy working week, she’s Nanogirl – a superhero teaching kids that science doesn’t have to be boring or take place only in the classroom. 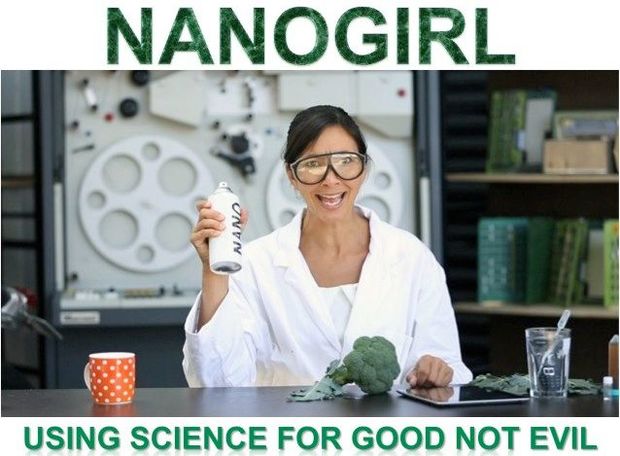 Nanogirl grew out of the communications work Michelle already does on TV, as well as tweeting, blogging and talking on the radio. And it has brought her this year’s Prime Minister’s Science Media Communication Prize, worth a useful $100,000. Heady stuff for a scientist who isn’t really that much into talking to people.

“I never really wanted to communicate at all…I accidentally fell into it.”

In 2013 Michelle spoke at TEDxAuckland about her work with biomedical materials engineering and afterwards discovered a hunger amongst the public for what she calls an “easy to understand source of information”.

“I realised that I have a responsibility as an academic because I’m paid for by taxpayer money…people are paying for my lab and they have no idea what I do. And so I have a Facebook group for my lab so you can see what experiments I’m running every day. And also if you want to be more curious we’ll send you links to the papers and you can read about the science.”

The next step for Michelle was Nanogirl, conceived as a way to talk to children and young people.

“One of the things I try and show the children I’m involved with is that just because you failed an exam it doesn’t mean that you’re not successful. Maybe you’re a hands-on learner, not a writer. And so how do we actually encourage children to be creative and still be rewarded for it? And the school system struggles to do that just because we are very outcomes-oriented.”

And that’s just what she was doing when Justin Gregory met her recently in a suburban backyard in Auckland. In attendance were young science fans Travis, Macy and Jessica. 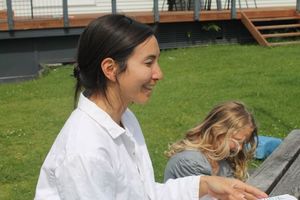 Michelle Dickinson as Nanogirl in a suburban backyard in Auckland Photo: RNZ

Travis and Michelle are gleefully pouring white vinegar over a generous heap of baking soda.  The result is predictable.

‘Here it goes! And that’s our volcano. Goodness gracious, making a mess everywhere. Do you know why it’s doing that?” asks Michelle.

“’Cos when the acid meets the vinegar it can’t handle it and it explodes!” answers Travis.

“It’s forming a gas called carbon dioxide, have you heard of that before?”

Michelle says that one of the things she tries to do as Nanogirl is talk to kids about the science as it happens, to ask them questions about it, and most of all, to try and make the science applicable to their lives.

“I work with a lot of children who don’t even have science in school. And so I’m just trying to show them that science is all around them, that you can do it at home, you can do it in a kitchen…it’s something that you can create (with), have fun with and learn about at the same time.” 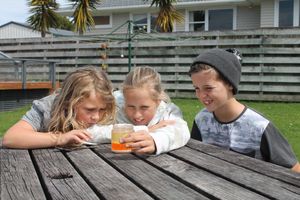 Earlier this year, Michelle completed the 100 days project; 100 different science experiments with 100 different people over a hundred day period. She says the kids taught her a lot of the experiments, including one invented by Jessica to test the buoyancy of eggs in salt water.

“She wrote a beautiful recipe in her colouring book for me…to show me that she knew enough science to actually be able to teach me something.”

Part of the $100,000 prize money will be used to publish a book of science “recipes”, using ingredients easily found in a Kiwi supermarket or kitchen. Some will go on making more online video content. Michelle has big plans for the rest

“I’m going to be setting up a national science prize for children to show their science. So it’s a communication award for children who are doing science to upload their videos (to show) that they can do AND talk about science too.” 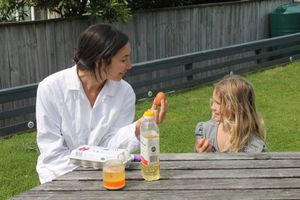 And Nanogirl’s superpowers will only get stronger and stronger with the creation of a charity called OMG Tech! Michelle (as Nanogirl) is a co-founder of the initiative to develop the next generation of inventors and innovators through access to technology.

“Nanogirl is all over the place. She’s on What Now, kid’s TV, I make my own videos. I’m trying to broaden who Nanogirl is and who she can touch, so that she can influence more children than I can reach myself. Spreading the excitement of science!”

Michelle has spoken about her nanoindentation work on Our Changing World before:

And to hear her as Nanogirl: