Invasive Plants – Predicting How Bad They Will Be 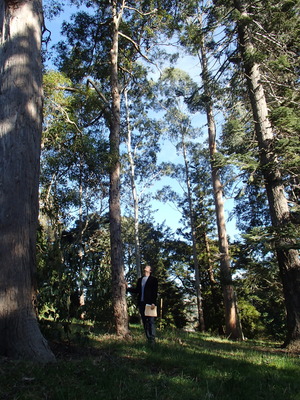 Invasive plants – introduced species which have become an economic problem or a conservation problem – cost New Zealand dearly. The Agresearch website says that ‘pastoral weeds [alone] are estimated to cost the New Zealand economy $1.2 billion per annum’, a figure which is a combination both of direct control costs and lost production.

New Zealand has been described as 'one of the weediest countries in the world'. There are about 40,000 plant species in New Zealand, of which 37,600 have been either deliberately or accidentally introduced. 2,100 of these introduced plants have naturalised, or gone wild, and of these, 500 are bad enough weeds that they must be managed by law, under the Biosecurity At 1993.

The Department of Conservation has its own list of invasive plants that pose an environmental threat. They identify 328 vascular species, nearly half of which are trees and shrubs.

Although it is possible in retrospect to analyse why some introduced plants have become a problem while others have been ‘well behaved’, it is very difficult to try and predict in advance which species will behave in which way.

Steve Higgins is a plant ecologist in the Botany Department at the University of Otago. Throughout his career he has wrestled with the issue of invasive plants. In a recent scientific paper ‘Invasive plants have broader physiological niches’, Steve Higgins and co-author David Richardson set out to see if they could identify which species of eucalyptus and banksia would become problem species.

They looked at 749 Australian tree species that have, over the last 100 years, been introduced outside Australia and whose fate - failed to naturalise, naturalised, invasive - is known. Distribution records in the Australian Virtual Herbarium allowed them to work out the natural range of each species in Australia, and they compared this with a physiologically-based species distribution model.

“The methodology allowed us to say how general is a species in terms of its physiological tolerance,” says Steve Higgins. “And the kind of trivial result at the end of it is that things that are good generalists are more likely to be invasive than things that appear to more specialised in their environmental requirements. And just because it’s a simple answer doesn’t necessarily mean that it’s wrong.”

But although they were able to correctly predict the likely range of a plant 92% of the time, Steve says it still doesn’t answer the question of exactly what is happening.

He thinks that the Enemy Release Hypothesis explains why some species do so well in other countries. “If you move a species into a novel environment, it leaves all its enemies behind - so insects or pathogens that might feed on it. And then instead of putting resources into defending itself the plant can put more resources into producing more flower and more seed, and perhaps also just growing bigger and stronger.”

“On the other hand,” Steve says, “Some species haven’t invaded because they haven’t got some of their mutualists with them. So often the eucalypts haven’t been as successful as we thought they might because they don’t have their mycorrhizal root fungi with them, which help the plant take up soil resources like phosphorous and nitrogen.”

“I’ve seen studies where plants in a new environment are producing two orders of magnitude more seed than they do in their home environment. It’s a numbers game at the end of the day – just swamp them with numbers. It’s just a brute force attack until you end up dominating.”

Steve believes that this methodology could be useful in predicting the invasive potential of other groups of plants, and not just trees.