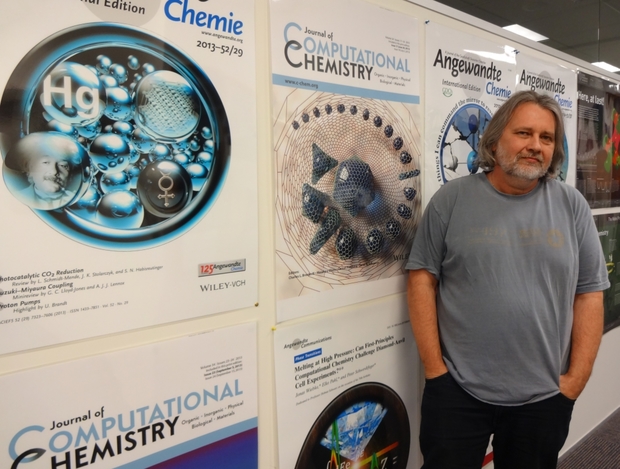 Massey University theoretical chemist Peter Schwerdtfeger was awarded the Rutherford Medal, New Zealand's highest science prize, for his research on how atoms and molecules interact at the quantum level. In the background are the journal covers that feature his work. Photo: RNZ / Veronika Meduna

Why is gold golden, and why is mercury liquid at room temperature?

These are some of the questions Peter Schwerdtfeger, a theoretical chemist at Massey University's Center for Theoretical Chemistry and Physics, has been able to answer - with the help of complex computer simulations and Einstein's special relativity theory. His ground-breaking research has earned him New Zealand's highest science prize, the Rutherford Medal.

The Rutherford Medal was one of 12 prizes awarded to outstanding scientists last night at the Royal Society of New Zealand's Research Honours event.

The selection panel describes Peter Schwerdtfeger as one of New Zealand’s most brilliant and internationally highly sought-after scientists who has made "world‐leading contributions to fundamental aspects of chemical and physical phenomena in atoms, molecules and condensed matter". His focus has been on how atoms and molecules interact at the quantum level.

'For a very long time people believed that relativistic effects are of no importance to chemical systems because from Einstein’s special relativity we know that if particles reach very high velocities close to the velocity of light, then special relativity becomes important. People thought that for electrons in the valence shell, which are important for doing all the chemistry but move rather slowly, that you wouldn’t expect that relativity effects would be important.' _ Peter Schwerdtfeger

Peter Schwerdtfeger was the first person to show that the colour of gold and the metal's unusual oxidation states are due to relativity effects. When he wrote his first paper on gold chemistry, he was a post-doctoral researcher at the University of Auckland. He says it took him six months to run the calculations on the university's supercomputer, but when he submitted the paper, it was soundly rejected by the reviewers. "One reviewer said it shouldn’t be published anywhere, and another said he didn’t believe the results and that there must be an error in the programme." In the end, the research took two years to get published.

His interest in mercury goes back two decades. Chemists knew that there was something unsual about this element -  the only metal that remains liquid at room temperature. At the time, Peter thought he could solve the puzzle quickly. He asked Nicola Gaston, now a principal investigator at the MacDiarmid Institute, to take it on for her PhD project. "I was very blue-eyed", he says. "It took another decade."

But with increased computer power and a team of collaborators, he was able to show that without the effects of relativity, mercury would be solid at room temperature and melt at 82 degrees Celsius.

The selection panel noted that many of Peter Schwerdtfeger's papers have been revolutionary. Some that were rejected initially are now his most cited papers. Recently, five of his research papers were selected for the cover of international journals, including his work on fullerenes (carbon-based structures first discovered by Nobel laureate Harry Kroto in the 1980s) and his research on the symmetry, or handedness, of biological molecules such as amino acids and sugars.

Most recently, he has also explored the idea of using graphene perforated with nano-sized holes to separate gases. "Why are we doing this? Because of the Pike River mine disaster. We're using graphene as a membrane, and we're punching nano-holes into it. We've designed these nano-holes on the supercomputer and we then simulate it to see if certain molecules go through the sheet of graphene or stay on one side. It would be absolutely wonderful if methane could be separated from oxygen and nitrogen to prevent explosions."

He would like to see the funding for the Marsden Fund at least double to raise the success rate from currently 9% to 20%.

'If you only invest in commercial science and completely neglect basic science you probably get neither of them.

In this interview, he discusses his research and shares his thoughts about the role of fundamental research in New Zealand.