Tuatara in a Cold Climate 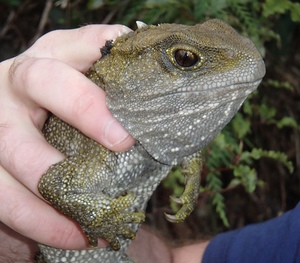 The tuatara, Sphenodon punctatus, is the only living example of an ancient order of reptiles, the Rhynchocepahalia, which has been around for more than 250 million years. Once widespread throughout the North and South islands of New Zealand, tuatara numbers soon dropped after the arrival of Maori due to predation by both humans and the Pacific rat, or kiore, and habitat clearance. For the last couple of hundred years it’s been confined to 32 small islands in Cook Strait and northern New Zealand. The largest population of tuatara is found on Stephen’s Island or Takapourewa, in Cook Strait.

Tuatara have an interesting relationship with temperature. They are ectotherms (”cold blooded”) so their body temperature depends on the ambient temperature. They live in the forest, and are active at night, but spend sunny days basking at the entrance to their burrow. Tuatara don’t have sex chromosones, but instead, like other reptiles, sex is determined by the soil temperature during the long – up to 15 month – incubation. Temperatures below 21.2° Celsius during the first seven weeks of incubation produce females, while above 22° Celsius produces males. This pattern is the reverse of that seen in turtles, in which higher temperatures produce females. 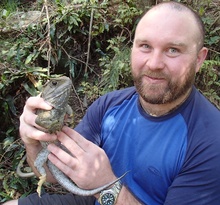 Two years ago, a group of adult and juvenile tuatara from Takapourewa were moved to the Orokonui Ecosanctuary, north of Dunedin, which is surrouned by a predator-proof fence and is free of mammalian predators. This site is 500 kilometres further south, and therefore cooler than other known tuatara areas. Zoologist Alison Cree, from the Zoology Department at the University of Otago, and her students, including current PhD student Scott Jarvie and previous student Anne Besson, have been investigating how tuatara will cope with these cooler temperatures, for example the effect it has on growth rates of juvenile tuatara.

Some of the female tuatara that were transferred to Orokonui Ecosanctuary were gravid and several laid their eggs in a shared nest site, out in the open on a sunny gravel track. A third female was discovered outside the sanctuary, 1.5 kilometres from her home site, and she laid one egg which has also been added to the nest. This is the longest distance of travel known for a tuatara, and it is believed she may have been flushed out a culvert during a rain storm while she was wandering in search of a nest site.

These eggs at Orokonui were laid later and are taking longer to develop than eggs laid on Stephens Island/Takapourewa, which Alison Cree says is not surprising given the cooler temperatures. One clutch of eggs has since been predated by a kiwi – although the event was not captured on remote cameras positioned at the nest there are distinctive probe holes in the ground and in the eggs.

“Some of the eggs were damaged, destroyed,” says Alison. “There were advanced embryos in some of them, so we know they can develop as embryos here, but we’re not going to see any evidence of hatching from that nest. 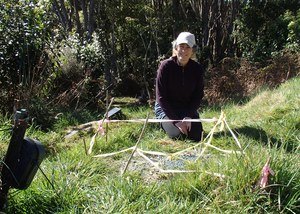 Alison Cree behind a tuatara nest, which is marked with tape to prevent people walking on it (it's on a gravel track) and watched over by a remote camera. Photo: RNZ / Alison Ballance

Alison is philosophical about the kiwi predation. “It’s not a predator-free situation. We’re trying to reconstruct part of what would have been a natural ecosystem, and it is natural for tuatara and kiwi to be in the same area – it just hasn’t happened that frequently recently, as tuatara have been restricted to offshore islands, most of which don’t have kiwi on.”

The remote cameras have collected photos of a kiwi walking past the tuatara nest site, and also shots of male tuatara that lives nearby, posturing and raising its spines in display. The kiwi in the sanctuary are rare Haast tokoeka.

The new book ‘Tuatara: biology and conservation of a venerable survivor’ is written by Alison Cree, and published by Canterbury University Press. The book, which is as venerable as the tuatara, and has taken Alison many years to write, is a comprehensive and scholarly account of tuatara aimed at biologists and people with a strong interest in the unusual reptile.