Water treadmills are often used to help horses recover from injury, but Paul Macdermid from Massey University in Palmerston North has had one custom built for people.

“I believe there’s two [water treadmills] for human use in New Zealand, one down in Christchurch and this one, and there’s a number of horse water treadmills around the country,” says Paul. 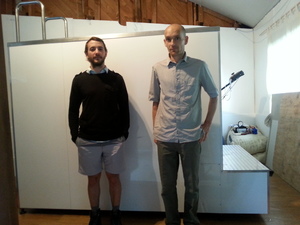 From left to right: Matt Miller and Paul Macdermid in front of the water treadmill Photo: RNZ / Ruth Beran

Runners constantly hit the ground with 4 or 5 times their body weight through their legs, so they often suffer from overuse injuries. “So things like running in a microgravity climate like a water treadmill or a G-trainer like they have in Auckland could be quite beneficial for preserving athletes life span,” says Paul. Water treadmills can also be used by people who would otherwise have difficulty exercising on land, because they are overweight.

The water treadmill in Paul’s home was constructed by O'Leary Engineering and consists of a big, insulated stainless steel container, with a ladder at one end to climb in and out of. The treadmill belt is about 2 to 3 metres long, and the water sits at waist height.

The water is set at 21.5˚C. “Which while colder than the average swimming pool, it’s good for exercising in,” says Paul. 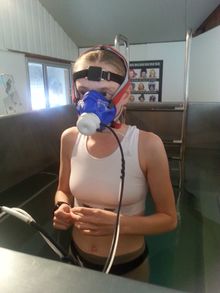 Paul is studying how people run on a water treadmill compared with an ordinary treadmill and is recording stride frequency, ground contact time, and vertical oscillations, as well as using accelerometers to measure shock attenuation. “Which is the difference between the peak acceleration on impact, when the foot hits the floor, and at the same time, or very similar, the peak acceleration in the head,” he says.

The difference between the two indicates how hard the body has had to work to get rid of the energy to the head to protect the brain and the central nervous system. Paul says there’s an 80% reduction in the water treadmill as compared to running on land.

Trial participants also wear a gas mask connected to a portable metabolic gas analyser which analyses expired gas to estimate inspired gas. This enables an estimate to be made of the work that’s been done.

“You kind of look like Darth Vader. Everyone always thinks they’re the first one to come up with that comment, but we get that pretty much all the time,” says Matt Miller, from Massey University.

Kara Macdermid, a student at Awatapu College and cross country athlete says: “I like running on here,” she says. “As well as being without injury and stuff it also makes you feel better for the other training sessions I find.” She demonstrates how athletes run on the treadmill and is weighed beforehand. She is just over 50% lighter in the water.

From results so far, Paul is finding a 40 to 50% reduction in accelerations. “So it’s a very good method of allowing someone to run either while injured or to increase the amount of training that they can do safely without increasing the risk of an injury,” he says.

Secondly, oxygen consumption of the athletes is showing a difference of 15 to 20 ml oxygen/minute between the two treadmills. “Which is huge in terms of a percentage,” says Paul. “If you look at the gas analyser Kara’s here she’s at around 45 ml of oxygen per minute, on the normal treadmill she’s at around the 30 mark. So that’s a good reduction.”

Paul is also finding that athlete’s heart rate is higher on the water treadmill as compared with the normal treadmill. In Kara’s case there was a 25 beats per minute difference, indicating that it’s harder to run in the water treadmill than the ordinary treadmill when the water is at waist height. “That’s because of the hydrostatic resistance provided by the water as your moving your limbs through the water,” he says. “And the faster she tries to run the greater that resistance, so the greater the work that will have to be done.”

This means athletes don’t have to work as hard on the water treadmill to maintain fitness.

“The data shows that they can reduce the speed at which they run at but still get the cardiovascular adaptations that they would get if they were outside doing an easy run but without that risk of impact,” says Paul.