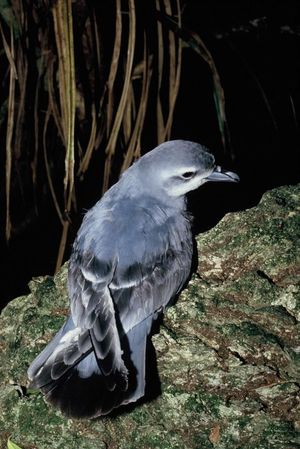 “These fairy prions are so gentle, they really are at the bottom of the pecking order for seabirds.” Graeme Loh

At the end of a cul-de-sac, in the Dunedin suburb of St Clair, a small path worn through the grass by a team of keen volunteers leads to a surprising predator-proof fence perched on the edge of steep sea cliffs. The prion fence, as it’s known, is the brainchild of Dunedin conservationist Graeme Loh. It is part of an effort to secure the future of a small colony of fairy prions, which breed on a narrow ledge halfway down the 70-metre high cliff. Graeme also wants to enthuse people about the birds.

“I want to make it easier for people to come and study them, and to come and appreciate them,” says Graeme. “What I want to do is get people excited about the greatest seabird country on earth, which is New Zealand. We have more of these birds breeding here than in any other country, they make fantastic sounds, and these fairy prions are so quiet and friendly. It’s such a great thing about New Zealand – but most people don’t know about it.”

Graeme, along with fellow ornithologists Graeme Taylor and Alison Davies, first spotted the ledge in 1992, while cruising the coast between Blackhead and St Clair in a small inflatable boat, searching for little blue penguins. They noted seabird burrows that they assumed belonged to sooty shearwaters or titi, and some evening vigils from the cliff top confirmed that titi were indeed present.

A year passed before Graeme summoned the courage to abseil down to the ledge, using an old hawser-laid rope, and he was very surprised to find that the burrows actually belonged to fairy prions. These small burrowing seabirds are very vulnerable to introduced predators such as rats and stoats, and so are usually confined to predator-free offshore islands. However, rats aren’t able to reach the ledge, and so the birds are able to breed in total safety. 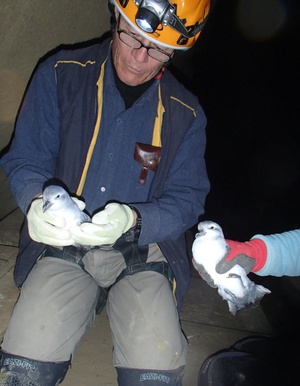 Graeme Loh has put leg bands on more than 1200 fairy prions at the St Clair colony since 2000, and he makes regular roll calls to follow the progress of the banded birds. Photo: RNZ / Alison Ballance

However, the ledge is a less-than ideal place to breed: it is eroding away, and in most places the soil is too shallow for the birds to build burrows. To help the birds out Graeme began to build bird motels, wooden nesting boxes that would both be a safe ‘state house’ for the birds, and also enable him to easily check in on the progress of the nests via a hatch in the top of the box. He has installed about 90 nest boxes, and all of the building material had to be lowered down by rope, as abseiling is the only way to reach the colony.

“I stopped building nest boxes when I was here by myself one night and it was the peak of the season and I thought ‘gee this has got a bit more than a hobby’. With about 80 of these occupied by two birds that’s a lot of legs to read bands on,” says Graeme.

Graeme began putting leg bands on the birds in 2000, and he’s now banded more than 1200 birds. Some of those original birds are still breeding in the colony, including one pair that have bred together for that entire time. Graeme says he “does see quite a bit of mixing and matching. Some partners are changed, and sometimes they move next door to a different nest box.”

Graeme plays recordings of fairy prions in the small area protected by the predator-proof fence, and he hopes that the calls will attract birds to breed there and establish a second population. He is also keen to protect other seabirds, such as titi, to ensure that St Clair’s secret seabird cliffs is home to as many kinds of seabirds as possible. 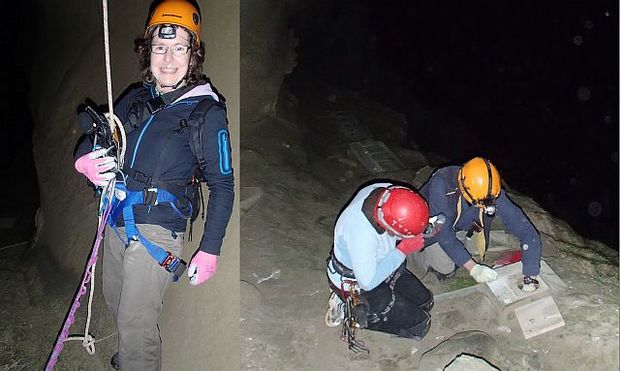 The only way to reach the fairy prion colony is to abseil 50 metres down a sheer cliff - Alison Ballance completed the descent with her sound recording equipment slung over her shoulder (left); Graeme Loh and Tiff Stewart (right) checking the leg bands of fairy prions using the nest boxes that Graeme has built on the ledge. Photo: RNZ / Alison Ballance