Hydrogen has been touted as one alternative to fossil fuels, but for planes or even cars to run on hydrogen, the gas needs to be stored in large quantities. One method for storing hydrogen and other gases are materials called metal-organic frameworks (or MOFs), which are a bit like 3D molecular sponges or sieves. 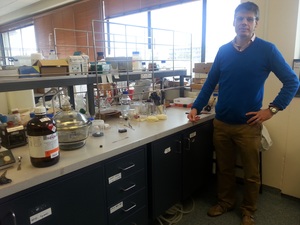 Shane Telfer at his work bench in the lab Photo: RNZ / Ruth Beran

“The most important feature of metal-organic frameworks is the fact that they’re mostly free space,” says Assoc. Prof. Shane Telfer a chemist from Massey University.

Not surprisingly, metal-organic frameworks consist of metals and organic linkers. The frameworks are made by combing two solids: a metal salt (commonly zinc, but also other metals like copper or cobalt) together with the organic linker (typically a carboxylic acid) in a liquid solvent which is then placed in a glass vial and put in the oven at about 85˚C over a few hours or sometimes overnight.

Microscope images and a diagram of the inside of a metal-organic framework Photo: Luke Liu and Shane Telfer, Massey University

The process of creating metal-organic frameworks is sometimes called ‘shake and bake’. “What you do is transform a couple of non-descript powders that dissolve into a solution that is very ordinary looking and then  you allow the magic of the crystallisation process to happen and you form these beautiful crystals with all sorts of gorgeous shapes,” says Shane.

The crystals are usually the size of a sugar or salt grain, and once created they are checked out under the microscope. 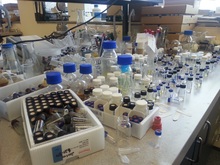 “Some are simple cubes, very nice edges and facets to them but others that we make have dodecahedral shapes and other more complicated polygon shapes to them,” says Shane.

X-ray crystallography is then used to determine if the structure is open and potentially porous, because once the solvent is removed, these materials can become very sorbent and store, separate, or be used in the catalysis, of other molecules, like gases.

“For example, CO2 capture, there’s a lot of interest in implementing these sorts of materials where they could be put for example, into a smoke stack and used to selectively sorb out the CO2 from an emission stream,” says Shane.

Crystallography gives the atomic structure at a very high level of resolution so once the structure is determined, gas sorption analysis is used to determine how well the sample is taking up a gas like hydrogen, methane, CO2, nitrogen or argon.

To do this, supercritical CO2 is used to remove the solvent from the crystals in a very gentle way, which prevents the framework from collapsing. This maintains the material’s openness and the connection between all of the pores in the material.

“[Gas sorption] tells us exactly the information that we need to know to be able to say this is a great material, it has a lot of promise for CO2 capture, or we should really try and push this ahead into a membrane for methane purification, it really directs us to the applications,” says Shane.