Science Behind 1080 Use in Conservation

“If you go into a forest anywhere in New Zealand, that hasn’t had any pest control, the thing that strikes you about it is that it’s incredibly quiet – because our forest are buggered. The predators have been gobbling their way through our forest birds for the last 100 years. And if we’re killing any birds with 1080, it’s more than made up for by the increased productivity that these birds have because we’ve killed the rats, stoats and possums that eat them, particularly while they’re nesting.” – Graeme Elliott, scientist, Department of Conservation

In July this year, then-Conservation Minister Nick Smith announced that Battle for our Birds, billed as New Zealand’s largest-ever pest control programme, would go ahead to protect native wildlife from a plague of rats and stoats.

The $21-million programme is using aerial drops of the toxin 1080 across 700,000 hectares of Department of Conservation land, to knock back rodent and stoat numbers, which have surged following a mass seeding event in native beech forests.

In June 2011 Parliamentary Commissioner for the Environment Jan Wright published as report titled ‘Evaluating the use of 1080: Predators, poisons and silent forests.’ In the report she noted: ‘It was a surprise in this investigation to discover that possums, rats and stoats are only controlled on one eighth of Department of Conservation land. We may well be looking at a future where many of our special plants and animals can be found only on offshore islands with extremely limited access to the public and in sanctuaries behind big fences. Without active pest management, kiwi chicks have a one-in-twenty chance of making it to adulthood.’

Jan Wright also noted in her report: ‘It is my view based on careful analysis of the evidence that not only should the use of 1080 continue (including in aerial operations) to protect our forests, but that we should use more of it.’ Battle for our Birds is a response to this call. 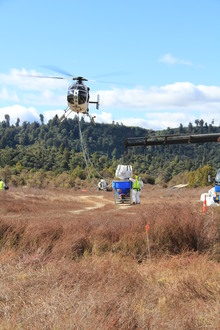 Battle for our Birds began its programme of aerial drops in August, and they will continue at different sites across the country until the end of the year. Results from Waikaia Forest in Southland, which was one of the first areas to be treated, has seen rat abundance, as measured in tracking tunnels drop, from above 30% and rising, to 0.5%, while mouse tracking rates are just 3%. DoC describes this as a fantastic result. Rats, stoats and mice are monitored using tracking tunnels, and possums are monitored using wax tags

1080 was developed as a vertebrate pesticide in the United States during the 1940s, and at the same time this research was being carried out scientists in Western Australia identified the same compound in nature, in plants that are toxic to livestock. The earliest report of field testing of 1080 in New Zealand was 1956.

To find out more about the science of 1080, Alison Ballance spoke with a toxicologist, a native bird ecologist and a Department of Conservation biodiversity manager.

To see a long-term research project into the impact of predators on native bird populations in action and the effectiveness of 1080 treatment, Alison headed to South Westland, to join DoC’s Jason Malham as he remotely collected data from a female kaka carrying a smart diagnostic radio transmitter. Jason is part of a team, led by conservation scientist Graeme Elliott, carrying out long term ecological research in South Westland, the Marlborough Sounds and the Tararua Range near Wellington. Remote sound recorders are used to record native forest abundance throughout the year. As well, the nesting success of some species is followed in detail: in South Westland the species are kaka, morepork and rifleman. At Tennyson Inlet in the Marlborough Sounds the species are robins, weka and rifleman, and in the Tararuas rifleman are studied in detail.

This project began about 6 years ago and will continue for another year or two. The areas were chosen as they were already being treated with 1080 for conservation, with the aim of killing, rats, mice, stoats and possums. At each site there is a control area which is not treated with 1080, and one or treatment sites receiving different amounts of 1080 at different intervals. Large amounts of data has been collected and data analysis is ongoing, but initial results show that mice and rat numbers drop to almost undetectable levels straight after a poison bait drop, that robin breeding success climbs from 20% to 80% following a bait drop, and that birds such as kaka are eight times more abundant in areas treated with 1080 than in areas that haven’t been treated. Fifty moreporks were fitted with radio transmitters before 1080 operations and all survived. 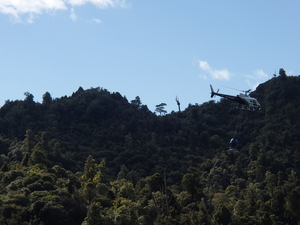 A helicopter with a bait bucket underneath flies over the Tongariro Conservation Area, where 1080 is regularly used to protect kiwi and whio Photo: RNZ / Alison Ballance

The Tongariro Conservation Area in the central North Island is a national kiwi sanctuary and one of five national security sites for whio or blue duck. Brent Guy is Biodiversity Conservation Services Manager for DoC, and he says that the 17,000 hectare area has been treated with 1080 to control predators and protect kiwi and whio since the late 1990s. A new regime of treatment will see much smaller amounts of toxic baits applied aerially every 3 years rather 5 years, as monitoring has shown that kiwi chick survival is high in the two years following 1080 treatment, but declines rapidly in the third year as predator numbers rebuild. In recognition of the importance of the Tongariro Conservation Area to the local community for hunting, a large area of the forest was treated with 1080 baits that had had deer repellent added.

A week before an aerial 1080 operation, non toxic baits are dropped. This provides a pre-feed to rats, and ensures a high rat kill following the toxic bait drop. Mice, rats and possums eat baits directly, while stoats are secondarily killed after eating rats and mice that have died from the poison.

Landcare Research toxicologist Penny Fisher says that among the advantages of 1080 or sodium fluoracetate compared to other toxins is that it is a simple organic molecule, it is well-known, it is cheap, it is water soluble and it biodegrades quickly and easily. It is rapidly broken down by microbes in the soil, and if an animal consumes a sub-lethal dose the 1080 is rapidly excreted in urine within a few days. In the body sodium fluoroacetate breaks down to fluorocitrate, which interferes with the Kreb’s cycle in cells. If an animal consumes a lethal dose it dies within 24 hours.

The toxicology lab at Landcare Research is able to detect amounts of 1080 in water as small as 0.1 part per billion. The allowable level of 1080 in water is 2 parts per billion. According to this website: 'Landcare Research maintains a database of the results of over 2000 water samples tested by the toxicology laboratory for 1080 contamination since 1990. As summarised by Booth et al. (2007), 3.6% (76) of the water samples contained detectable 1080 residues and in most of them (70) the 1080 concentration measured was less than 1ng/mL (parts per billion). There is no evidence that drinking water has been contaminated and the extensive research and monitoring in catchments treated with 1080 indicates that this is highly improbable if current safety procedures are followed.'

The Forest and Bird website reports that: 'By comparison,1080 occurs naturally in black tea leaves from India and Sri Lanka - brewing a normal cuppa will give you about 5ppb of 1080 in your tea, which is 1.5 times the drinking water limit.’

Following recent media coverage about the results of a laboratory test in which captive trout were force fed high doses of 1080 and subsequently tested positive for low levels of 1080 in their flesh, the Ministry of Primary Industries has issued advice that ‘trout caught from areas following 1080 pest control operations do not pose a food safety risk to anglers.’

This programme was first broadcast on 23 October 2014.