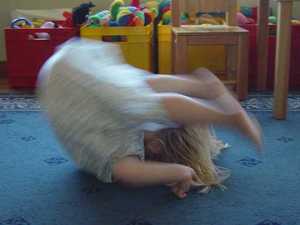 ADHD or attention deficit hyperactivity disorder is characterised by poor self-regulation, and children with ADHD are often very active, inattentive and show poor self control, compared to their peers. Photo: RNZ / Alison Ballance

A University of Otago psychologist is optimistic that games could be a successful early intervention for preschoolers at risk of being diagnosed wtih ADHD.

Dione Healey says that ADHD or Attention Deficit Hyperactivity Disorder is "essentially a disorder of poor self regulation." It is usually diagnosed in children - both boys and, to a lesser extent, girls - around the age of 6-7 years old. Self regulation is an important skill for children to develop, as the Dunedin longitudinal study has shown that children with poor self regulation had poorer outcomes in terms of health, well being and social acheivement.

The ENGAGE intervention - which stands for 'enhancing neurocognitive growth with the aid of games and exercise' - identified preschoolers who were far more active and showed less self control and emotional self regulation than their peers. Both the children and their parents were taught 25 different games over 5 weeks, and were then encouraged to play the games at home.

Dione says she deliberately chose simple games that could often be played without any props, and could be undertaken out in public, in the car, or while watching siblings play sport, for instance.

Examples of games included statues - in which the child could rush around until the parent shouted 'freeze' when they had to stand completely still, and animal speeds - in which the children practised moving quickly like a cheetah, mid speed like a giraffe or slow like a turtle. Memory games such as cups or cards were used, along with relaxation techniques like deep breathing and fist squeezing.

Parent Lola Gloger reported that the games "were a life-saver". Her daughter was 3 years old when the one year study began, and Lola says that she was very active, would run away when they were out shopping, being games and then abandon them after a few minutes, and that family dinner times were very stressful as her daughter struggled to sit still for more than a minute.

Lola and her daughter enjoyed playing the games, and once Lola understood their intent they began inventing their own games as well. If her daughter began to run away Lola says she could just say "freeze" and her daughter would stop, and that the animal speeds game made family trips to the museum much more pleasant. When her daughter started school Lola was pleased to hear that her daughter was very attentive in class and able to stay focused.

Lola also reported that she learnt a lot as a parent, and that being required to spend half an hour each day focusing on playing games with her daughter had been a very rewarding experience.

Dione Healey commented that the reason the games seemed to work so well is that they involved the children in developing new skills and taking control of their own behaviour. The usual interventions for ADHD are medication and behavioural management training, but the benefits of these seem to stop when the intervention stops. The benefits from the games intervention, however, have lasted well after the study finished.