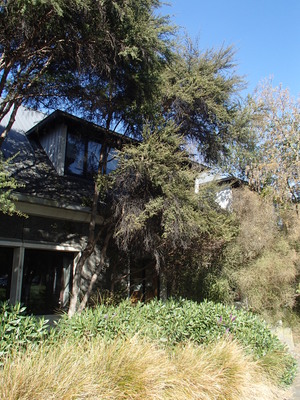 Native plantings around a Dunedin building include low grasses and shrubs as well as quite tall trees. Photo: RNZ / Alison Ballance

Domestic gardens make up the largest amount of green space in cities, but their role in supporting urban biodiversity and ecosystem functioning has not been well appreciated in New Zealand. This got a multi disciplinary team thinking about the various benefits of gardens, and led to a collaboration between a planner, zoologist, botanist and entomologist that investigated 55 Dunedin gardens.

The study recruited a range of volunteers, including gardeners and non-gardeners, with a wide range of garden types and sizes in suburbs of different socio-economic status.

The study was interested in finding out how much knowledge people had about native biodiversity to begin with, and whether simple knowledge sharing would result in a change of attitude or gardening practise amongst the volunteers. As well, gardens were surveyed for woody plant, beetle and bird diversity.

Yolanda van Heezik from the Zoology Department at the University of Otago said that the most important variable contributing to species richness was the size of the vegetated area in a garden or the proportion of the property that was vegetated.

Claire Freeman from the Geography Department said that one of the challenges facing planners looking to improve native biodiversity and habitats in a city is that the contributions made by gardens is a consequence of many individual decisions. As well, there is a trend to infill housing, smaller sections and larger dwellings, and in increase in hard landscaping and paving, all of which lead to a loss of garden vegetation.

Kath Dickinson from the Botany Department said that as well as playing an important but undervalued role in supporting urban ecological diversity the study also concluded that gardens contribute a lot to the physical and emotional well-being of the property owners. This was summed up in the words of one of the study participants which became the title of one of the papers published from the study: 'my garden is an expression of me.'

The invertebrate research was led by Barbara Barrett from AgResearch, and one of the key findings was that 95% of the beetle species recorded in gardens were native species.