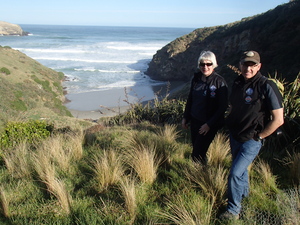 In 1985 it was estimated that there were more than 500 pairs of hoiho or yellow-eyed penguins breeding on the Otago and Southland coasts. Within less than 5 years that number had plummeted to 141 pairs. The cause of the sudden decline? Starvation and disease outbreaks.

The Yellow-eyed Penguin Trust was formed by a group of concerned Dunedin residents, with the original aim of providing safe breeding habitat for the penguins.

The Trust, a voluntary organisation with a long-standing sponsorship from cheesemaker Mainland, embarked on an ambitious programme of fund-raising to buy coastal land that it fenced, revegetated and trapped predators on, in an effort to provide suitable shady nesting habitat. The Trust owns or manages a number of reserve, with its most recent project being a long strip of coastline at Long Point in the Catlins.

Since the 1990 low the population of yellow-eyed penguins has increased, but continues to go up and down due to various disease outbreaks. 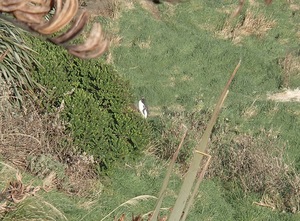 Last breeding season there was another significant starvation event, which has seen the number of breeding birds drop to its lowest level for a while.

Alison Ballance caught up with Yellow-eyed Penguin Trust general manager Sue Murray and field manager Dave McFarlane at the Trust's Otepahi Reserve on the Otago Peninsula, to talk about the highs and lows of working with one of the world's rarest penguin species, and the Trust's ambition to turn its attention from the land to the sea, where the penguins spend most of their time.