Detecting Oestrogen in the Environment 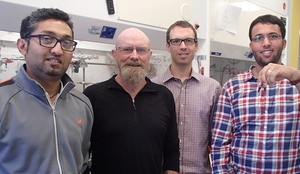 A team of researchers at Victoria University of Wellington have developed a novel sensor that can detect tiny amounts of the hormone oestrogen in environmental samples.

Ken McNatty from the School of Biological Sciences is interested in ways of detecting environmental contaminants. “Currently we don’t have sensitive methods of detecting environmental contaminants, so my interest was trying to develop new techniques for detecting trace residues, particularly of organic materials, plasticisers, hormones [and oestrogen mimics] that are in the environment, and being able to monitor them continuously over a long period of time,” says Ken McNatty. “I was interested in developing systems that would be ten to a thousand–fold more sensitive than any current method.”

Ken and PhD student Shalen Kumar have been focusing their efforts on developing a PCR-based detection system, but in the meantime Shalen’s work on aptamers has led to the development of a different kind of sensor.

Aptamers are single-stranded DNA or RNA molecules that can bind to pre-selected targets including proteins and peptides. They bind tightly and are very specific to particular molecules. Shalen’s work identified an aptamer that detected oestrogen. The idea of aptamers piqued the interest of Justin Hodgkiss from the School of Chemical and Physical Sciences, and the MacDiarmid Institute for Advanced Materials and Nanotechnology.

“When I first learnt about apatmers I thought that was so cool the way you could use synthetic chemistry and biology to discover these sequences that stick really strongly to something,” says Justin. “Obviously these things are exactly what you need to make a sensor, as a sensor needs something that sticks to the target you’re interested in, the hormone oestrogen in our case.” 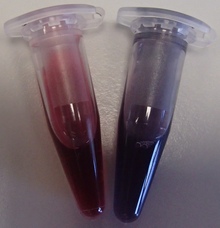 The oestrogen sensor operates with a simple colur change. The pink solution, at left, contains an aptamer that has bound to gold nanoparticles. In the purple solution, at right, the aptamer has detected oestrogen Photo: RNZ / Alison Ballance

PhD student Omar Alsager explains that “our sensor is a combination of the [oestrogen-specific] aptamer that Shalen has developed and gold nano-particles.”

“The aptamer coats the surface of gold nano-particles, which are pink in colour,” says Justin. “When this solution is exposed to oestrogen the aptamer binds to it and the solution changes to a purple colour.”

“The amounts I’m talking about are really tiny. The equivalent would be taking a pinch of oestrogen and putting it in an Olympic swimming pool.

The sensor is very specific to the hormone oestrogen, and doesn’t react to other hormones such as testosterone, and it works in ‘messy’ solutions such as human urine as well as cleaner water samples.

The research has just been published in the jounral Biosensors and Bioelectronics, and the team are carrying on to refine the sensitivity of the sensor and to expand it to target other molecules. Justin is excited by the possibilities that aptamers offer in future sensor development.

“In principle you can make an aptamer for any protein or molecule you want,” says Justin. “And Shalen has the methods to do that really effectively.”

Ken McNatty says the sensor is a great first step, although he’s still hoping to develop a much more sensitive PCR-based system.

Earlier this year Our Changing World spoke with ex-pat Kiwi chemist Terry Collins about his research with green chemistry and oestrogen mimics.

Next Thursday 6 November, at 7.30pm in Palmerston North, Ken will be talking about how his reproductive research has led to improved success rates in IVF - in a Royal Society of New Zealand Ten By Ten lecture titled ‘What makes a good egg’.