Killing Rats With Self Setting Traps

A ship rat is easily identifiable from a Norway rat: it has a longer tail, which reaches past the animal's nose, and large ears that fold down over the eyes. Rat teeth marks on a detector card (right) are quite long, and as well, rats quite often destroy the card. Photo: RNZ / Alison Ballance

The Good Nature company has designed a range of humane, self resetting animal traps to control pest species such as rats, stoats and possums. A few years ago on Our Changing World we featured the self resetting possum trap, and to find out how the trap development has gone since then Alison Ballance catches up with Robbie Greig again, to see their rat trap in action.

A number of the self setting rat traps have been placed along Wellington’s South Coast to help protect nesting little penguins, as part of Forest and Bird’s Places for Penguins project. 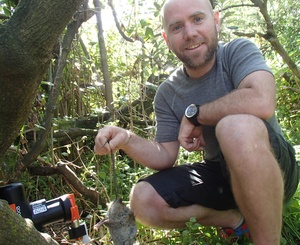 Robbie Greig from Good Nature, next to a self resetting rat trap screwed onto a small tree trunk, and holding a ship rat killed in the trap. Photo: RNZ / Alison Ballance

The rat trap is mounted above the ground, on a tree trunk, and a smell lure encourages the rodent to stick its head into the trap. It features a small carbon dioxide cylinder which fires a bolt when the animal brushes past a leaf trigger. The bolt is fired into the rat’s head, killing it instantly, and the body drops onto the ground beneath the trap. The canister can kill 20 rats or mice before it needs to be replaced. Alternatively it should be replaced every 6 months.

The key to the trap is the bait. Robbie Greig says that for rats and mice they use a nut-based lure. The same trap can be used for stoats, in which case a meat-based lure is used, as well as for animals overseas such as mongooses, in which case a fish-based lure is used. At the moment the bait needs to be refreshed every month, as it oxidises in contact with air and becomes less effective.

“The bait is the crux at the moment,” says Robbie. “We’re working on systems so that you’ll have a bait that you install, that will constantly dispatch a high protein high sugar bait, and that will last you six months.”

Good Nature have also developed some simple detector cards, containing a small packet of the nut-based lure. This is screwed onto a trunk, and left for a few days. Animals that interfere with the card will leave distinctive teeth marks – and in the case of rats, will often destroy the entire card. The detector cards serves three purposes: it identifies which species are present, where the animals are and therefore where is a good site to place a trap, and it also acts to pre-feed the animal and get it used to eating the nut-based lure. Then, when a trap is put in place the rat is already primed to the bait.

The Good Nature team have been working with the Department of Conservation to eradicate rats from small Native Island, close to Stewart Island. Native Island is within swimming distance of rats, so the idea is that the resetting traps that are used to eliminate the existing population will remain in place to catch any new arrivals.

The self setting traps are another tool in the fight against introduced predators, that sit alongside toxins such as 1080 and brodifacoum which are applied aerially for large scale control, as well as single kill traps that require frequent checking.