Rumble strips - or audio tactile profiled markings as they're more properly known - are used on roads to let drivers know when they're veering out of their lane. They reduce road accidents signficantly, but they wear out over time and become less effective. The New Zealand Transport Agency (NZTA) wanted to know how worn they could be before they needed to be replaced, and whether a wider spacing was as effective as a narrow spacing, and OPUS Research was contracted to carry out research. 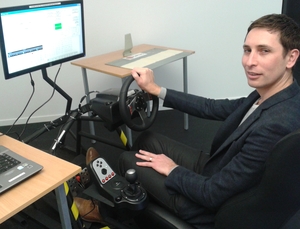 Behavioural scientist Jared Thomas led the study, which used a specially developed audio tactile profile simulator, which plays audio recordings of rumble strips of different heights, and also provides vibrational feedback to the study participants. The simulator is a little like a video arcade game, with a seat, steering wheel and foot pedals.

“We use a high workload situation, and a visual task – because driving is primarily visual,” says Jared. “It’s called the Stroop test, and that’s the main test and the secondary task is detecting the audio tactile marking.”

In the Stroop test, which tests reaction time, a colour word (such as red or blue) appears on a screen, but the actual colour of that word may vary. The task is to detect what colour the word actually is rather than the colour it describes; for instance, the word red might appear, coloured blue, and the person has to select ‘blue’ as the answer.

Another question that the study addressed was spacing – were rumble strips with the bars 25 cm apart as effective as those with a spacing of 50 mm? The results showed that the wider spacing was as effective, which should lead to cost savings.