Motorways in New Zealand are made from asphalt concrete (left) which is made from chipping aggregate mixed with bitumen. The urban road at right has been recently chip sealed, which comprises a layer of aggregate on top of a thin layer of bitumen. Photo: RNZ / Alison Ballance

The aim of the pavement team at OPUS Research is to help create better roads that last longer and are more cost-effective to build and maintain. They work on highways, rather than motorways or urban roads, at a range of scales from the large physical, to chemical and even nano.

Pavement scientist Steve Bagshaw told Alison Ballance that roads are made from four layers: the underlying ground is known as the subgrade, and on top of that goes the sub base, which is the first manufactured layer. Above that is the base course, which is the main load bearing component of the road and contains specifically sized and shaped stones that interlock after compaction. On top of that is the wearing course, which might be asphalt concrete or chip seal.

New Zealand roads are made from bitumen, which is a by-product from oil refining, Bitumen is visco-elastic which means it is elastic, like rubber, but it also has modifiable viscosity like a liquid, so when it is heated it becomes liquid but it becomes rubbery as it cools. 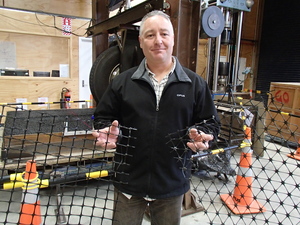 Steve Bagshaw is holding different kinds of geogrids, which are being tested with the accelerated pavement wear machine behind to see how effective they are at creating a consolidated base course of rounded river gravels. The base course is the load bearing part of the road. Photo: RNZ / Alison Ballance

In New Zealand, motorways are constructed using asphalt concrete, similar to overseas, but most highways and secondary roads are made using unbound flexible pavements with chipseal surfaces. In asphalt concrete, chipping aggregate is mixed into bitumen. Chip seal is made from a thin layer of bitumen, into which is pressed a layer of hard-wearing chipping aggregate. Chip seal is often placed on top of existing road surfaces to extend the road life; the downside of chip seal roads is that they are often noisy.

The accelerated pavement tester at OPUS Research is a large truck wheel suspended from the ceiling above a box containing an experimental base course – a known load is applied to the truck tyre, which then runs for say, 60,000 rotations, over a number of weeks. This equates to many years of actual road wear in real life, and allows the pavement team to see how well the test pavement stands up to wear, or how badly it ruts.

At the moment OPUS Research is testing a base course made of river gravel, rather than quarried aggregrate. Because they are rounded gravels don’t lock together well, so the pavement team is also testing geogrids, that are plastic mesh with different sized holes to help lock the gravel.

In the Bitumen Chemistry Lab the team focus on bitumen oxidation, which makes the bitumen more brittle. They are trying to reduce the rate at which oxidation occurs, and are looking at modifiers such as epoxy which is mixed with bitumen to make a hard but flexible surface.

Steve Bagshaw adds that traditionally chip seal is not considered to add any strength to a road, but that an epoxy-modified chip seal creates a self-supporting pavement that does add strength to the surface of the road. Their initial results also suggest that water, which is traditionally regarded as the main cause of damage to roads, may help epoxy resins set better.

“Epoxy bitumen is quite a different paradigm,” says Steve. “And we’re pushing a technique into realms that have never been looked at before.”

OPUS Research carries out much of their research for the New Zealand Transport Agency, which set the standards for road construction in New Zealand.

The accelerated pavement wear machine (left) is being used to test a base course made from rounded river gravel. Steve Bagshaw (right) is holding an example of chip seal made with epoxy bitumen which is rigid and self-supporting, unlike normal chip seal. Photo: RNZ / Alison Ballance

Last week on Our Changing World we heard about geodesy, the science of location that underpins the accurate positioning of new roads.