During the breeding season, kereru make spectacular display dives high above the forest canopy (left). Kereru were once commonly seen in very large flocks, but such flocks are a much rarer sight these days. Photo: Tony Stoddard / Kereru Discovery 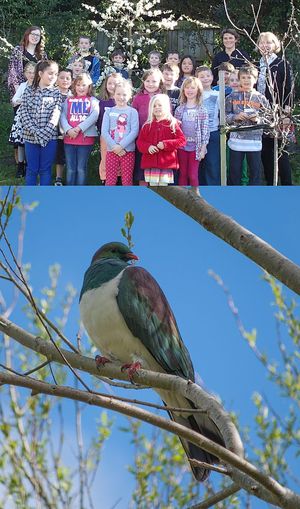 A citizen science project to count kereru, or New Zealand native wood pigeons, has just kicked off, and over the next two weeks organisers are hoping people from around the country will count kereru in their garden, local park or nearby park. The Great Kereru Count runs from 22 September until midday on 5 October, and builds on two previous counts carried out by the Kiwi Conservation Club, the junior naturalist club run by conservation organisation Forest and Bird.

“We are asking everyone in New Zealand to go out and spend at least 5 minutes looking for kereru,” says event organiser and Kiwi Conservation Club Manager, Tiff Stewart. “And then hop online and tell us how many kereru you saw.”

“The kereru is an incredibly important bird - it plays a crucial role in seed dispersal,” says Tiff. “It is the only bird that can swallow large berries like tawa, puriri, miro and karaka, so it plays a key role in regenerating our broadleaf forests.

Tiff Stewart says the event will help build a detailed picture of kereru distribution across the country, and the information collected will be shared with scientists, local bodies and community groups. The count is a collaboration between the Kiwi Conservation Club and Kereru Discovery, which is based in Wellington and is a collaboration between WWF-NZ and the Wellington City Council.

Alison Ballance joined Tiff Stewart and the pupils from Room 2 at Tainui School in Dunedin to carry out two five-minute counts in the school grounds, and even though no kereru were seen Tiff says this is still a significant result. She says that it’s important that people record if they don’t see any kereru, as zero counts will identify where kereru are absent or in very low numbers.

Research on urban kereru in Wellington featured in a previous Our Changing World story.

You can find more stories about kereru in the Radio New Zealand birds collection.