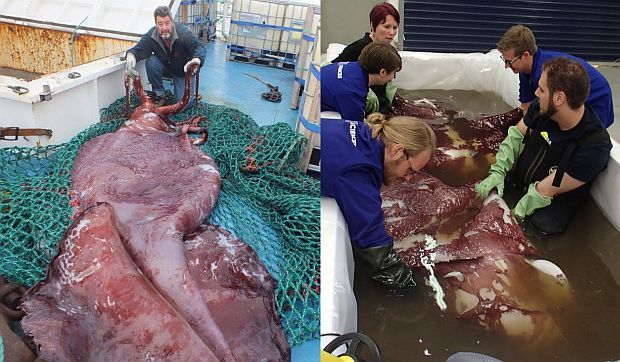 The colossal squid (left) on the deck of the Antarctic toothfish fishing boat the San Aspiring, with skipper John Bennett; (right) Kat Bolstad and a team of students holding the body of the colossal squid after it was thawed, during the live stream of their examination. Photo: Sanford San Aspiring crew (left) RNZ / Alison Ballance (right)

Scientists from the Auckland University of Technology (AUT) got a rare chance this week at Te Papa to examine a whole colossal squid. It’s only the second time that one of these giant cephalopods has been collected intact, and a team of squid experts, led by Kat Bolstad, were keen to get new insights into this enigmatic deep-sea creature.

Colossal squid are slightly shorter but much heavier than giant squid, making them the heaviest invertebrate in the world. They have hooks and suckers on their eight arms, and swivelling hooks as well as suckers on their two long tentacles. The heaviest reported specimen weighed almost 500 kilograms; this new specimen weighed about 350 kilograms, and its body was more than 2 metres long, while its arms measured about one metre. 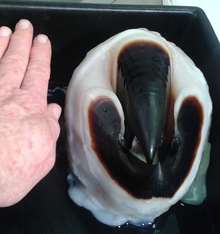 The beak of the colossal squid, shown with a hand for scale. Photo: RNZ / Alison Ballance

They are found only in Antarctic waters, and are believed to live as deep as 2000 metres.  They have the largest eyes recorded of any animal, and it is thought that these large eyes help them to hunt in the abyssal depths. This specimen had eyes that were about 35 centimetres in diameter, which was larger than the 27 cm recorded for the previous specimen.

It is not known what they feed on, but both intact specimens have been fished up by the Sanford long-liner San Aspiring, in the Ross Sea, under skipper John Bennett. On each occasion the squid was clinging to an Antarctic toothfish that had been hooked. The stomach of this specimen contained the remains of some of its prey, and these will be analysed to give the first-ever glimpse into the animal's diet.

The colossal squid was first recognised in 1925, from a partial specimen that didn’t fit the description of any other squid, but it was many years before it was officially classified and named. Its scientific name is Mesonychoteuthis hamiltoni. It belongs to a family of squid called Cranchiidae, which are known as glass squids, as other much smaller members of the family are translucent.

The first intact colossal squid was gifted to Te Papa in 2007, and examined in 2008. Since then this female has been a popular exhibit at Te Papa in Wellington. Dr Bolstad and her team had hoped that this new specimen – which they think is slightly smaller than the Te Papa squid – might be a male, as no male colossal squid have ever been seen. But soon after the defrosting began they found immature eggs, indicating that this is another female. 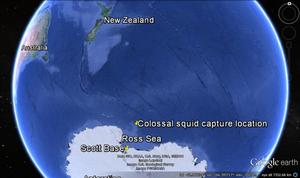 Our Changing World producer Alison Ballance visited Te Papa as the specimen was removed from the freezer and put in a tank of water to begin defrosting, and the science team were already making their first observations of the frozen mass. “We can see some very beautiful arms, and hooks and suckers, right up at the surface” said Kat.

When Alison returned the next day the squid was mostly thawed, and the team had collected a range of tissue samples. These samples will be used for later genetic work to determine how the colossal squid it related to other squid species, for stable isotope analysis that will allow its place within the Antarctic food web to be determined, and for metabolic work that might shed light on whether it’s a slow-moving animal or an energetic one.

Colossal squid are known to be commonly eaten by sperm whales in Antarctic waters, with research showing they make up nearly three quarters of the sperm whales diet. 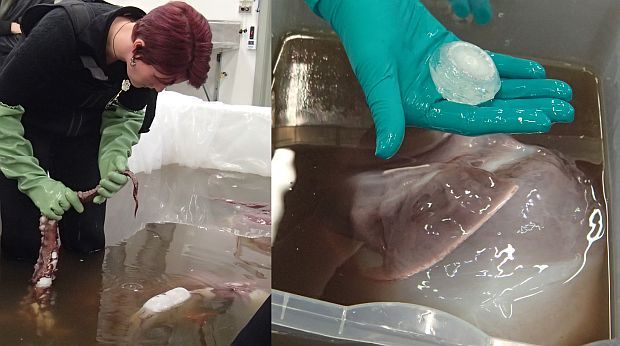 Kat Bolstad inspects one of the colossal squid's eight arms to count the suckers and hooks (left), and holds half of the lens of one eye: the entire eye, which is larger than a human head, is in the tank below (right). Photo: RNZ / Alison Ballance