The Science of Knowing Where You Are

“Geodesy is the study of the shape and size of the earth,” says Graham Blick, the National Geodesist at LINZ, Land Information New Zealand. “We’re interested in how big the earth is, how it changes through time due to earthquakes and plate tectonics, earth’s rotation and the earth’s gravity field.”

Geodesy involves applied maths and earth sciences, and Graham says it’s the oldest known science, dating back 2500 years to Pythagoras, who was among the first to recognise that Earth was elliptical in shape and orbited the Sun. 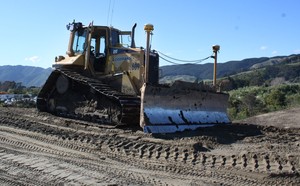 The two streetlight-like poles sticking up either side of the blade of this bulldozer are GNSS units that enable the machine to know exactly where it is digging, with millimetre accuracy Photo: LINZ / John Summers

LINZ is responsible for managing New Zealand's geodetic system. On its web site it describes how this system ‘provides the underlying measurements used to produce topographic maps and hydrographic charts. It is also an essential tool in setting and identifying property boundaries. The physical component of the geodetic system is a network of trig stations and geodetic marks that serve as physical reference points.’

“Knowing where you are and having accurate data sets is extremely important,” says Graham. “And what underlies all of that is the geodetic framework, and we often refer to that as ‘the infrastructure for infrastructure’. Before you start building infrastructure such as roads you must start with that accurate spatial reference framework.”

To see how this ‘infrastructure for infrastructure’ is used in practise Alison Ballance joined Graham Blick on a visit to one of the largest roading projects currently underway in New Zealand. MacKays to Peka Peka (M2PP) is an 18-kilometres section of the Kapiti Expressway, north of Wellington. Part of State Highway 1, it is a road of national significance.

Will Newall is survey manager for M2PP, and he says it is a world-leader in using GNSS technology. “I have a whole fleet of machines that have GNSS on board,” says Will.

Geodesy and surveying used to rely solely on physical measurements carried out on the earth’s surface. These days, the GNSS or Global Navigation Satellite System provides highly accurate location information that allows every point on Earth to be given its own unique address, namely its latitude, longitude, and height. The American GPS network is part of the global GNSS system that also includes positioning satellites from a number of other countries, such as the Russian GLONASS system.

While most consumer products in New Zealand, such as smartphones, use just the GPS system, professional surveyors such as Will Newall use the entire GNSS system, as the larger number of satellites allows for much for precise positioning.

Will Newall says GNSS has made it easier, safer and more cost-effective to build large infrastructure projects. “Most of the calculations are taken care of by the technology we use,” he says. “It effectively tells us where we are, in an instant, to within a centimetre or so.”

A number of the diggers and excavators being used in the M2PP project have GNSS fitted.

“They have the design in 3D, and they can see exactly where they are, and where the teeth of the buckets on the excavator are,” says Will. “So they can dig or fill the ground exactly to the design we’re trying to build.”

GNSS relies on referencing a highly accurate mathematical model of the Earth to calculate where positions are in relation to sea level, and this is created by precise measurements of gravity. LINZ has just finished a series of flights over New Zealand re-measuring gravity across the country, and Graham Blick says this will enable us to “transform GNSS-derived heights down to heights that approximate sea level, to an accuracy of 2-3 centimetres.” 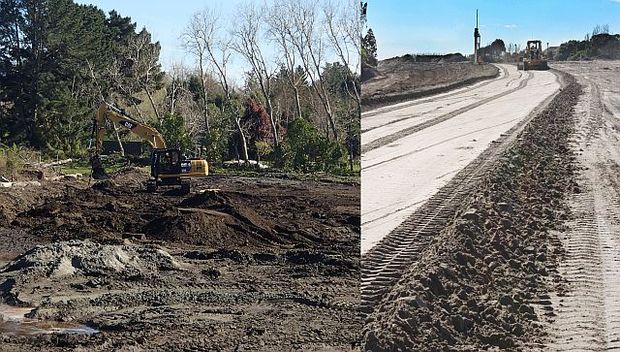 Both of these heavy earth-moving machines are equipped with GNSS (white orbs sticking out above the body of the machine). Photo: RNZ / Alison Ballance (left) LINZ / John Summers (right)