Antarctica is buried under hundreds of metres of ice – but underneath this massive ice cap lies a watery landscape and a thriving ecosystem. Over the last decade or so, scientists have discovered more than 400 lakes and a complex system of rivers underneath the ice, and recently, they found that these pitch-dark waters are teeming with microbial life. 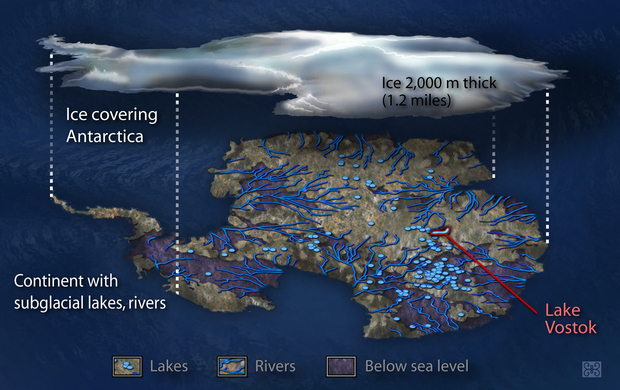 Martin Siegert is a co-director of the Grantham Institute at Imperial College London. He is a glaciologist with a long-standing passion for the least explored parts of Antarctica – the landscapes that hide deep beneath the continent’s icy blanket – and he leads a British team that hopes to explore subglacial Lake Ellsworth.

The first subglacial lakes were discovered back in the 1960s, unwittingly, by pilots charting ice-surface landmarks to aid flight orientation. It took several years before scientists connected the “oval depressions with gentle shores” seen by the pilots on the surface of the ice with actual lenses on water deep below where the ice meets underlying rock.

“Ice is an extremely good insulator of heat”, says Martin Siegert. “Even if air temperatures can be minus 60ºC or below, all you need is background geothermal heating from the Earth’s interior for the ice to be warm enough to melt beneath about three or four kilometres.”

Arguably the most famous subglacial lake is Lake Vostok, which lies 4000 metres beneath Russia’s Vostok Station and is one of the world’s 10 largest lakes. Two years ago, it became the first to be punctured, amid controversy as the Russian team used an existing ice-coring hole, sparking concerns about contamination of the lake.

But two other international teams have developing hot-water drilling technology to explore subglacial lakes and the untouched ecosystems within them. “Microbiologists thought that these lakes were viable habitats for life – and that’s what has driven the subglacial lake exploration.” 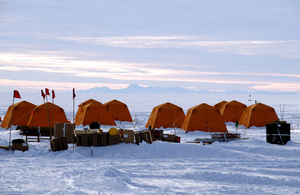 These lakes are among the most inhospitable places on Earth, yet in paper published in Nature last month, an American team showed that samples of water from Lake Whillans, extracted from below 800 metres of ice during the first season of the Whillans Ice Stream Subglacial Access Research Drilling project, contained microbial life as dense and diverse as that found in much of the world’s deep oceans.

In this interview, Martin Siegert tells Veronika Meduna why his team has chosen the deeper and older Lake Ellsworth for its project. “It is in the middle of West Antarctica, it’s ancient and possibly as old as the ice sheet itself, and it is at the top of the hydrological system so what ever ecosystem is there is not going to be influenced by any discharges coming from upstream.”

He says now that the question whether there is life underneath the ice has been answered, the focus is on figuring out how microbes have evolved in an environment that has been sealed from the rest of the world for hundreds of thousands of years.

The team has had to abandon its first drilling season because of technical problems, but hopes to return to the site with a probe, kept as sterile as a surgical instrument, that could be lowered into the lake to explore not just the water but the lakebed as well.