Mount Ruapehu, seen from the road leading up to the Whakapapa Village Photo: RNZ / Alison Ballance

Lahars are fast-moving volcanic mudflows or debris flows that have the potential to be hugely destructive. The Tangiwai rail disaster of 1953, in which 151 people died, was the result of a lahar flowing down the Whangaehu Valley, on the eastern flanks of Mount Ruapehu in the central North Island, following an eruption under the crater lake. In 1969 and 1975 lahars caused extensive damage to Whakapapa skifield facilities and some alpine huts. The most recent lahar on Ruapehu occurred in 2007.

“Lahars are floods on volcanoes,” says Department of Conservation volcanology advisor Harry Keys. “Most lahars on Mt Ruapehu are caused by eruptions through the crater lake. An eruption throws the water [out of the lake] onto the slopes around it and that water concentrates in a valley and comes hooning down the valley.”

Lahar can also contain ash, mud, ice and other debris, and move rapidly at 60-90 kilometres per hour. 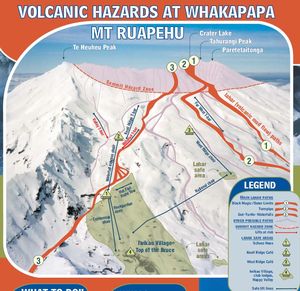 Lahars occur on Mt Ruapehu, on average, every 15 years. Most of the ski area infrastructure at Whakapapa is now safely located on ridges, but known lahar paths run down near the Far West T-bar, and The Gut, Waterfall T-bar and Waterfall Chairlift. Another lahar path runs through part of Whakapapa Village.

Harry Keys told Alison Ballance that lahars on Ruapehu are a “low probability, high consequence” event – although the risk to any one person is very low, there may be nearly 3000 people on a busy day on the ski field. Harry says he has calculated that the eruption detection system has reduced risk by about 98%, but notes that a large lahar going through the ski field on a busy day could still have the potential to cause many deaths.

The detection and management of volcanic hazard on Ruapehu is shared by GNS Science and GEONet, the Department of Conservation and ski field operator Ruapehu Alpine Lifts (RAL).

There are five systems within the volcanic alarm network for Tongariro National Park. The Eruption Detection System (EDS) on Mount Ruapheu provides warning of eruption lahars, particularly in relation to the Whakapapa Ski Area, as well as other volcanic hazards. The Eastern Ruapehu Lahar Alarm Warning System (ERLAWS) provides warning of lahars down Whangaehu Valley and on the eastern flanks of the park – the Whangaehu valley is the site of the largest and most frequent lahars on Ruapehu. There is also Tongaririo Eruption Detection system (TEDS), the village alarm system that provides a warning for the Whakapapa Village, and a lights system for the popular Tongariro Crossing. This is essentially a traffic light-like system at either end of the crossing which shines amber when there is possible danger and red when the crossing is closed due to high levels of volcanic danger. 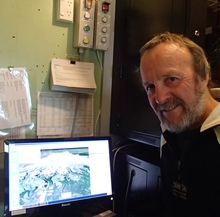 If the Eruption Detection System detects seismic activity or an explosive blast that might trigger a lahar, the safety warning system kicks into action, broadcasting sirens and safety messages telling people to move to high ground. As well, a radio tone is sent across the RAL radio system, alerting lift operators who are trained to move at risk people to high ground.

"A lahar warning on Ruapehu is a very short-fuse warning. People have less than two minutes to react and move to higher ground,” says volcanologist Graham Leonard from GNS Science.

For the last decade Graham has led a social science research programme, to improve communications around volcanic hazards on Ruapehu. They have worked with RAL to train lift operators, developed posters and other material that highlights risk areas as well as safe zones, and regularly surveyed people’s responses during tests of the EDS.

During the recent blind test of the system, Graham and his team of observers saw about 40-50 people who either didn’t get out of the way or failed to move high enough. Over the last five years of surveying they have found that the people who don’t move out of the way cover a wide range of ages and experience, and language doesn’t appear to be an issue.

“This persistent minority are the people we are targeting to try and work out how we can communicate with them better,” says Graham. “We are working with a professor of communications from Massey University, Elspeth Tilley, over the next two years to look at novel ways to communicate with the public ahead of a warning so they are better prepped to get out of the way.” 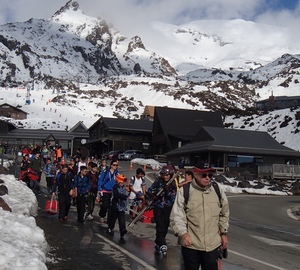 In previous Our Changing World stories we have talked with scientists from the Volcanic Risk Solutions Group at Massey University about their lahar research at Ruapehu, and about their volcanic eruption simulator, and we have found out about the new volcanic hazard alert system.