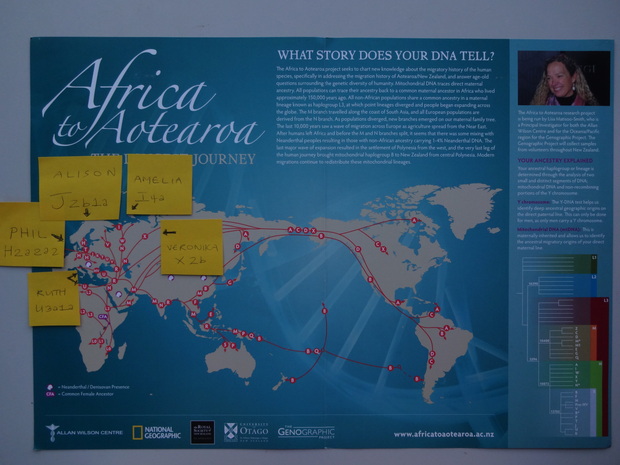 The results are in from DNA tests of 100 New Zealanders who took part in the National Geographic’s Genographic Project earlier this year.

Project director Spencer Wells and University of Otago anthropologist Lisa Matisoo-Smith, who is the principal investigator for the Oceania region, collected cheek swabs from the group to draw up a map of New Zealanders’ ancient genetic origins.

Among the participants, almost all European maternal lineages were represented, yet only three Asian and two Oceanic (Pacific Island) lineages were detected.  New Zealand’s Governor-General, Sir Jerry Mateparae was part of the group. His sample showed most Oceanic DNA overall (23%) – as well as Mediterranean heritage.

During the visit, the Genographic team also collected DNA samples from members of the Gisborne iwi Ngāi Tāmanuhiri as part of a global study of indigenous people, with the aim of using genetic markers to work out how people fanned out across the world.

The settlement of the Pacific was the last of the great human migrations, and New Zealand was its final destination. Modern humans first arose in Africa more than 150,000 years ago, but people reached New Zealand only 800 years ago, which means that Māori represent one the human tree’s youngest branches.