From Party Drug to Anti-Addiction Treatment 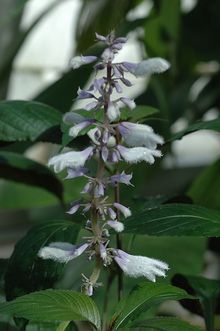 The herb Salvia divinorum has been used by Mexican Indians as a powerful hallucinogenic drug for many centuries Photo: Wikimedia Commons / Eric Hunt

Research on a hallucinogenic mint plant that is used as a party drug may lead to new, improved anti-addiction treatments, according to neuroscientist Bronwyn Kivell from Victoria University of Wellington.

“All drugs of abuse activate the dopamine reward pathway in the brain,” says Bronwyn, “And that’s the path I’m focusing on in my research - how different drugs of abuse, from tobacco and methamphetamine to cocaine, activate these pathways and what we can do to stop this reward process.”

Bronwyn’s research focuses on a protein called the kappa opioid receptor, and she told Alison Ballance that it has a method of action which is ‘almost opposite’ to drugs of abuse.

“It’s been known to have anti-addiction properties and it’s the body’s natural way of fighting against the drugs of abuse activating this pathway,” says Bronwyn. “It’s almost like a punishment system the body has, and if we can activate that system we can possibly reverse the rewarding effects of some of these drugs of abuse.”

Researchers in Bronwyn’s lab are screening various compounds that have been developed by medicinal chemist Thomas Prisinzano from the University of Kansas in the United States. The work is focused on the plant Salvia divinorum. Also known as Mexican tripping weed, it is a powerful hallucinogen that has been used by Mexican Indians for hundreds of years. The screening carried out in Bronwyn’s lab is initially done with cells, and promising compounds may then be tested with animal models.

Salvia divinorum or Mexican tripping weed is used as an illegal party drug but it also has potential for use as anti-addiction treatment Photo: Wikimedia Commons

The work involves identifying the cellular mechanism of action of the various compounds and coming up with a potential side-effect profile. Side effects, which include dysphoria (a feeling of unease), nausea and depression, along with a short period of activity, are the main reason to date that no compounds have made it to pre-clinical trials, but Bronwyn is hopeful that they have identified at least one compound with high potential that is long-lasting and appears to have no side effects.

Bronwyn suggests that in the future it may be possible to add a kappa opiod-based compound to prescription pain medication to help avoid the addiction that is a side-effect of their use.