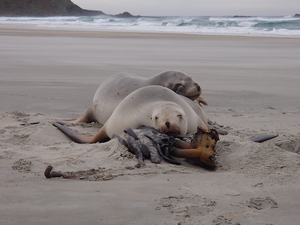 If a marine biologist can shave enough sea lions, she’s hopeful the fur she collects will give her insights into marine food webs and how they’ve changed over time.

Lucy Jack, from the Department of Marine Science at the University of Otago is using New Zealand sea lions and fur seals as ‘food web ambassadors’. The fur samples she collects from animals in Otago, Southland, Stewart Island and the Auckland islands will give her an insight into the diet of present-day animals, while collagen from sub-fossil bones from Maori middens will show what their diet was like before Europeans arrived. Archaeologists from the University of Otago have also been able to identify a few bones that pre-date Maori arrival in New Zealand.

Lucy tells Alison Ballance that she is using stable isotope analysis to identify whether the fur seals and sea lions, which are apex predators, at the top of the food chain, are eating food from a kelp-based or coastal food web, or from a phytoplankton-based open ocean food web.

“By finding out what trophic level they’re feeding at I can find out how tall the food web is,” says Lucy. “That’s important because natural food webs tend to be really complicated, and really tall with lots of links, which makes them really stable. Human impacts such as overfishing or sediment run-off and other kinds of pollution lead to loss of species, which leads to simpler food webs with fewer trophic levels which are generally less stable.

Lucy hopes the fur seals and sea lion data will show how food webs have changed over time, and that this information will help guide the restoration of fully functioning marine ecosystems.

To collect a small amount of fur from sea lions with the minimal amount of disturbance Lucy created a special piece of equipment, which consists of a cheap razor (one without a moisturising strip) clamped to a long broom handle. She has a special permit from the Department of Conservation which authorises her to approach animals on the beach, and after allowing the animal to sniff the razor she rubs the razor against its back or shoulder to snag a few hairs in the blades. Most sea lions happily ignore the razor, while a few enthusiastic ones actively rub against it as if they are enjoying a good scratch.

The research, which is still in an early phase, is part of a Marsden-funded project called ‘You can't go home again: forensic evidence for changes in ecosystem function following mainland extinction of pinniped.’

A story about research on the small but growing population of New Zealand sea lions on the Otago Peninsula has featured previously on Our Changing World. 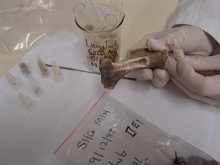 Extracting collagen from ancient sea lion and fur seal bones allows Lucy Jack to carry out stable isotope analyses and work out whether the animals are feeding in coastal waters or out in open ocean Photo: RNZ / Alison Ballance

In another Our Changing World story we heard about the Taking Stock project, and how archaeology was able to show how populations of New Zealand sea lions and fish have declined since pre-human times to the present day.

More University of Otago research has showed that until recently another species of sea lion inhabited mainland New Zealand, and has been replaced by the New Zealand sea lion.

What Sea Lions Can tell us About Marine Food Webs