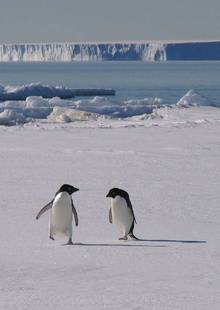 Antarctica's ice sheets hold three quarters of the world's freshwater, and if they melt they would cause a significant rise in sea level, which would be catastrophic both for local animals such as Adelie penguins as well as many large cities around the world. Photo: RNZ / Veronika Meduna

The world is already experiencing rising sea levels because the oceans are expanding as they warm up. This thermal expansion has so far been the biggest contributor to sea-level rise, but Antarctic scientists predict that melting ice sheets will become the driving force sooner than we thought.

Antarctica is in the spotlight this week as New Zealand hosts the Scientific Committee on Antarctic Research (SCAR) open science conference for the first time, together with several other high-level conferences and public events taking place under the banner of World Science Week New Zealand.

The SCAR meeting brought together almost 1000 top researchers to discuss the changing face of Antarctica and the impact on global climate and biological diversity.

One of the speakers is Rob DeConto, a geoscientist and climate modeller at the University of Massachusetts Amherst, who has focused his research on the dynamics and sensitivity of Antarctica’s ice sheets and their contribution to sea-level rise.

The Antarctic ice sheets hold about 75 per cent of the world’s freshwater, frozen in a delicate equilibrium, and if they were to melt, sea levels would rise by almost 60 metres. Earlier this year, research based on four decades of satellite observations showed that some major outlet glaciers in West Antarctica are melting and have already reached a point of no return (you can read our story and listen to our interviews here). NASA warned that there was nothing to stop the complete retreat of these glaciers, which in turn would speed up the flow of ice from the West Antarctic Ice Sheet.

Rob DeConto tells Veronika Meduna that the latest climate models confirm the melting of West Antarctic glaciers and predict that Antarctica’s ice sheets could contribute more than a meter of sea-level rise by the end of the century – significantly more than the projections in the latest report by the Intergovernmental Panel on Climate Change.

A lot of the Antarctic ice sheet is sitting on bedrock that is well below sea level, in some places more than a kilometre below sea level. The West Antarctic Ice Sheet is essentially just bathed in ocean water.” 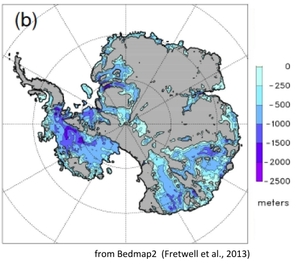 This map shows the areas of the Antarctic ice sheet that are sitting on bedrock, well below sea level Photo: BedMap2

Parts of Antarctica’s ice sheet are grounded below sea level. As the ice sheets themselves flow out into the ocean, they form floating slabs of ice called ice shelves, and Rob DeConto says that as the oceans continue to warm, these ice shelves will thin and lose some of the buttressing effect they have on the ice further inland.

The latest climate models Rob has developed use data from present-day observations as well information from the geological record. Two past periods of particular interest are the Pliocene, from about three to five million years ago, and the Last Interglacial, about 125,000 years ago.

During the Pliocene, carbon dioxide levels in the atmosphere were about the same as we have today, about 400ppm, but temperatures were 2-3ºC warmer than today. “Today’s global climate hasn’t caught up with the level of CO2 that we already have in the atmosphere,” says Rob DeConto.

During the Last Interglacial period, sea levels were five to nine metres higher, but CO2 was only about 280ppm, with temperatures similar to those today.

For both periods, there are good geological records showing how much higher the sea was, including the Wanganui Basin record which we featured recently on Our Changing World.

Drilling Into A Warmer Past 18 min 29 sec

Rob DeConto says the latest models are now, for the first time, able to reproduce the changes in sea level during these past periods, which makes them robust tools for projecting into the future. They show more than a metre of sea level rise coming from Antarctica alone by 2100, and up to 10 metres by 2500, depending on what measures are taken over the next decade to reduce greenhouse gas emissions. However, changes in sea level are not uniform across the globe, and the biggest impact of increased melting in Antarctica will be felt in the Northern Hemisphere.

Rob DeConto is staying on in New Zealand to present the S.T. Lee lecture in Wellington on Wednesday 3 September and another talk in Dunedin next week.