Antarctic Time Travel and Past Climates

Think Antarctica and you will most likely think of ice.

Today, the ice sheets that cover the Antarctic continent represent the world’s largest solid object. More than 90 per cent of the world’s ice is in fact in Antarctica, and this gigantic ice cube stores three quarters of the world’s freshwater, frozen in a delicate equilibrium.

But wind back a few million years in time and Antarctica is covered in lush rainforests and teeming with life, including giant penguins, sloths and rhino-sized hoofed creatures.

The changing face of Antarctica is the focus of the Antarctic Time Travel exhibition, which opens in Christchurch at the end of August. The exhibition is part of the 2014 New Zealand Icefest, a two-week festival that celebrates New Zealand’s connection with the frozen continent and runs from 27 September to 12 October. The Antarctic Time Travel exhibition opens a month early to allow schools to explore Antarctica’s past and its role in global climate, now and in the future.

Housed in Antarctica-style shipping containers, the exhibition takes visitors on a journey that begins 50 million years ago, some time before the first ice sheets began to spread across the land. It examines the triggers that led to the cooling of Antarctica and its gradual transformation from a green and warm continent to the icy landscape we know today.

Developed with GNS Science, Victoria University, Lincoln University and NIWA, and written by Our Changing World’s Veronika Meduna, Antarctic Time Travel considers Antarctica’s role as an archive of past climate conditions and the part it plays in present and future climate change. 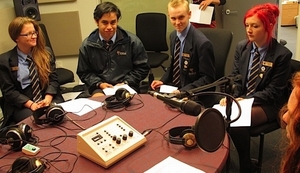 Exhibits include plant fossils that formed 45 million years ago, a cast of a skull of a small toothless dolphin that once roamed the Antarctic coast and sediment cores that illustrate natural climate cycles in the past. Also on display is drilling equipment used to extract ice cores that show that carbon dioxide levels in the atmosphere today are higher than they have been in the last 800,000 years.

From the past, the exhibition moves into the future to 2100 to envisage what the world would look like, depending on the decisions made now. Throughout the exhibition, interviews produced by students from Aranui High School discuss why Antarctica is such an important component of Earth’s climate system and how the continent will contribute and react to climate change in the future.

Schools are invited to visit the Antarctic Time Travel exhibition and Ice Lab, which showcases new architecture and science in Antarctica. Bookings are essential and can be made here.