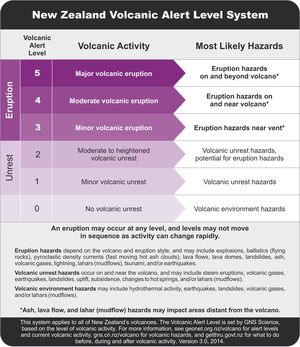 New Zealand’s volcanic hazard alert system was introduced nearly 20 years ago, to provide a fast way of alerting authorities about the status of the country’s volcanoes and their level of activity. Last month it was revised with a simpler, more powerful system, as a result of research carried out by social scientist Sally Potter.

As part of her PhD research Sally Potter, who is now a Post-Doctoral Fellow at the Joint Centre for Disaster Research with GNS Science and Massey University, surveyed volcanologists and various end-users such as civil defence and local authorities about the existing volcanic hazard alert system, which was actually two systems – one for frequently active volcanoes and one for what was termed reawakening volcanoes. This system was originally designed by Brad Scott from GNS Science, and he is pleased that it has been updated with a single system that now covers all of New Zealand’s volcanoes.

“One of the important things that we need for dealing with volcano problems in a place like New Zealand is some means of communicating the level of activity at the volcano,” says Brad. “In the last 16-20 years our ability to understand frequently active volcanoes has significantly increased, the GeoNet project is allowing us to do a lot more monitoring, collecting much better data, and we now actually have the confidence and the ability to split the unrest into low levels and high levels.”

Sally Potter says the revised system is much simpler. “We simplified the wording in it so there’s less jargon now, so it should be lot more understandable for end-users and for the public to be able to understand what the level of activity is.”