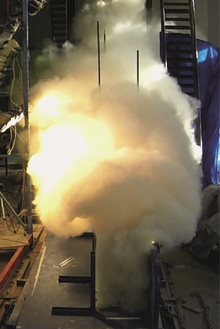 Pyroclastic flows are extremely hot, fast, and dangerous. They’re also not well understood. But a team of Massey University volcanologists hope their volcanic eruption simulator will change all this.

Pyroclastic flows are explosive volcanic eruptions which send hot avalanches of gases, ash and rocks speeding down the flanks of volcanoes. Pompei was engulfed by a pyroclastic flow, and such flows are a potential risk posed by all of New Zealand’s volcanoes.

Because of the difficulty and danger of trying to study pyroclastic flows in the field, the Volcanic Risk Solutions group at Massey University have come up with a novel way of producing their own pyroclastic flows, using a large scale simulator.

“We can simulate all sorts of explosive volcanic eruptions,” says volcanologist Gert Lube. “We’re aiming to simulate large-scale volcanic processes, as they occur in nature, but so that we can trigger the eruption whenever we want to. What we’re really interested in is to understand better these really dangerous explosive eruptions.”

The volcanic eruption simulator, nick-named Mount Doom, is housed in a disused boiler house on Massey University’s Palmerston North campus. It stands 15 metres tall, and can drop between 2-5 tonnes of ash and pumice that was collected from Lake Taupo and was deposited during one of the world’s largest volcanic eruptions about 1800 years ago. The material is dropped from a hopper and speeds down a long narrow channel to simulate the effect of an eruption being channelled down a valley.

“We do need many more measurements from inside volcanic eruptions to do hazard assessments and hazard mitigation and plan evacuation zones around volcanoes,” says Gert. “We can’t do this in small scale simulations, and I’d say this is the minimal scale you need to be at to just see everything that occurs in nature.”

This video shows some of the pyroclastic flows triggered in the ‘Mount Doom’ volcanic eruption simulator.

Pyroclastic flows are a mixture of gases, ash and pumice.

“These eruptions become really dangerous after material lifts into the atmosphere and then falls back down to the ground,” says Gert. “The material falls, hits the volcano again and produces these hot avalanches that race down the volcano, and are strong and fast enough and hot enough to do a lot of damage. They can knock down houses.” They can reach speeds of 300 kilometres per hour, and temperatures exceeding 800°C. 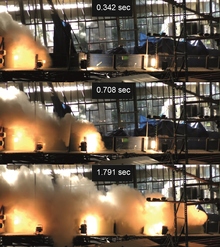 Side view of an ash and gas cloud - the elapsed time shows how fast the pyroclastic flow moves Photo: Massey University / Gert Lube

Gert Lube, Shane Cronin and their students have simulated nearly 30 eruptions to date, and can precisely determine the ratio of material to gas, as well as the temperature, to match the eruption styles of different volcanoes.

On the day Alison Ballance visited the team carried out an Auckland volcanic field-type eruption which was low temperature and contained a lot of gas. The resulting debris flow showed characteristics that matched deposits that PhD student Eric Breard has seen in the field around Lake Pupuke, with a wavy surface and evidence of dunes and anti-dunes.

Each simulated explosion is filmed with a range of high-speed cameras, and pressure and load sensors. It takes up to a week to set up each eruption, and many days of painstaking analysis afterwards to build a detailed picture of the physics and dynamics of what was happening inside the flow.

This research is supported by a Marsden Fund grant, administered by the Royal Society of New Zealand, and titled ‘Exploding the pyroclastic flow enigma with life-scalable experiments'. Team member Shane Cronin spoke with Jim Mora on Afternoons earlier this year, and has appeard in a previous Our Changing World story about lahars.