As Canterbury experiences a post-earthquake building boom, some very special dwellings have been appearing amongst the shrubbery in the grounds of Lincoln University. These multi-coloured and sometimes multi-storied dwellings are Bug Hotels, and they’re part of an experiment to work out ways of encouraging invertebrates to take up residence and breed in urban areas.

The Bug Hotels are the brain-child of landscape architect Neil Challenger and entomologist Rob Cruickshank.

“My landscape architecture students have designed bug hotels which are basically trying to create an environment for insects, preferably insects that are in decline, or are important but rare,” says Neil, “And we’ve installed them around the campus to see if they work or not.” 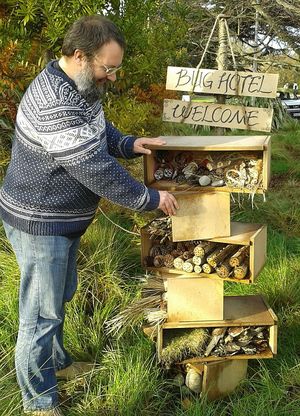 The Bug Ale House, which is handily located near the student bar on the campus of Lincoln University, features empty beer bottles, laid on their side inside an old beer crate. The Blue Lagoon Hotel is made of blue-painted boxes, filled with an assortment of sticks and pieces of bamboo with different-sized holes drilled in them, rolls of corrugated cardboard, pine needles and bundles of twigs. Others feature damp cellars or planted window-boxes, while the Butterfly Hotel offers a smorgasbord of plants to tempt both caterpillars and butterflies, such as milkweed to provide food for monarch butterfly caterpillars and stinging nettle for the native admiral butterflies.

Landscape architect students designed and built the bug hotels after being given information about the habitat requirements of various invertebrates.

Ecology students have been tasked with monitoring how the hotels are being used. Rather than destructively sample the hotels, Rob has ‘invented’ a 5-minute bug count. This is based on a survey technique familiar to people surveying birds – the 5-minute bird count – and each week, after spending five minutes watching what bugs are using the hotel, the students also survey a neighbouring control area.

Neil says “this is part of an experiment in ecological restoration for the students. When they go and do project work in the city somewhere, to actually put in a Bug Hotel and enhance the habitat for beneficial insects is potentially a really nice thing to be able to do.”

The Bug Hotels were installed in March, and over the cold winter months there hasn’t been much invertebrate action, but the pair is hopeful that occupancy in the hotels will pick up once the weather warms up.

“They’re not just for the insects – they’re for people as well,” says Rob. “Because they look nice they draw your attention and then you notice it says ‘Bugs – do not disturb’, it’s intended to make people a bit more aware about insects and other biodiversity.”

The Bug Hotels are an expansion of the idea of weta motels, which are hollowed out logs and even wooden pencil cases, attached to tree trunks to provide dark refugia which are used by hole-loving tree weta. 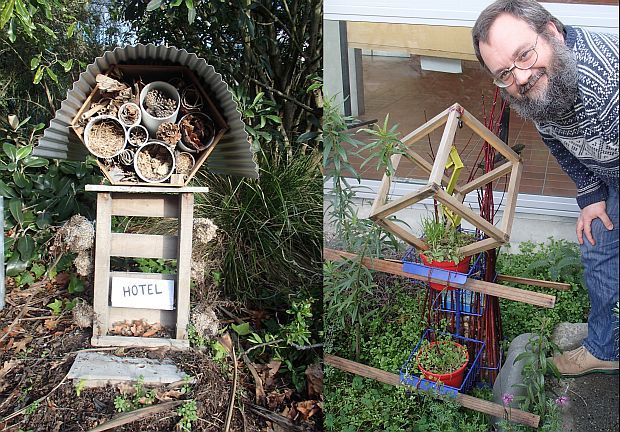