From bread and cheese, to kimchi and sauerkraut, beer and wine, fermentation is a key process in the creation of many foods and drinks. The process of fermentation is not just of interest to chefs and brewers – there’s even an area of science known as zymology, or zymurgy, which is the science of fermentation. 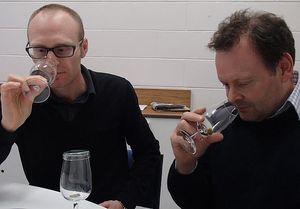 And at the recent International Science Festival in Dunedin there was an event titled Great Fermentations, which was billed as ‘zymurgy + communication = fun! an evening of beer, science and food.’

Alison Ballance went along to the evening to find out how a chef, a brewer and two food scientists had collaborated to create a five-course menu comprising a wide range of fermented foods, that were then matched to nine different and complimentary Emerson’s beers.

Mark Lane, executive chef at Otago Polytechnic, worked with students to develop the menu, which included items as varied as sauerkraut, clams pickled in a beer-based vinegar, sourdough bread, kimchi, pickles and salami. Richard Emerson, owner and brewer at Emerson’s Brewing Company was responsible for the beers.

Alison also went along to the Food Science Department at the University of Otago to talk with flavour scientist Graham Eyres and food scientist Phil Bremer (pictured above sniffing hop pellets, which provide key flavours for beer brewing. Image A. Ballance).

Phil explained that fermented foods had a long history, going back about 4000 years.

“There’s a whole lot of science in something like salami,” he says. “If it’s done right the way the microbes interact, the way the nitrate works, and the anaerobic conditions mean that you get a product that’s safe, has a long shelf life and of course tastes fantastic.” 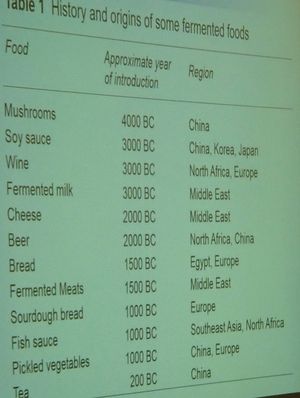 Fermentation depends on microbes such as bacteria, fungi or yeast. “The beauty of fermentation is that once it’s happened the bacteria or the yeast convert the lactose, the sugar in the milk, to lactic acid,” says Phil. “That drops the pH, and that makes the product more stable and importantly safer, as a lot of the pathogenic bacteria are killed.”

“Throughout history there’s been no technique that I can think of that’s been more important for providing a source of safe food,” comments Phil.

Graham works in the field of flavour science. He says that “an aspect of our research is to understand what the flavour and aroma characters in hops are.” Graham explains that a lot of the flavour in food comes from the volatile compounds that make up the aroma profile of a food or drink, and the ‘trained noses’ of human testers are used alongside gas chromatographs and mass spectrometers to quantify the compounds that make up each food’s unique flavour signature.

This recent Country Life story looked at Plant and Food’s hop breeding programme at Motueka, and This Way Up has featured a number of stories about beer and home brewing.