While some athletes head to high altitude for hypoxia training, others choose to train in the lab.

‘We don’t have many mountains that are high enough to do altitude training so we use simulated altitude,’ says Associate Professor of Exercise and Sports Science Mike Hamlin. ‘We take you to altitude by dropping your oxygen levels.’

At sea level air contains about 21% oxygen, whereas at about 4000 metres above sea level the proportion of oxygen is just 12-13%. Mike uses a machine called a hypoxicator to control the amount of air delivered to someone through a mask, and the subjects receive intermittent hypoxic exposure, which alternates 5 minutes of low oxygen exposure with 5 minutes of room air over 60-90 minutes.

When someone is exposed to low oxygen levels the oxygen saturation levels in their blood immediately drop (the blue line on the graph at left). Their body immediately responds by increasing the rate of breathing, to bring more air into the lungs, and by increasing the heart rate in an attempt to supply enough oxygen through the body (red line at left). The graph (left) shows a typical response during intermittent hypoxic exposure, with oxygen saturation and heart rate returning to normal levels when the person breathes normal air.

Over a longer time frame the kidneys respond by producing a hormone known as erythropoietin or EPO. EPO is responsible for making the marrow in the body’s long bones produce more red blood cells, as the haemoglobin in red blood cells is responsible for carrying oxygen around the body. EPO also leads to an increased blood volume. There are also changes within cells in the way mitochondria use oxygen, an increase in the number and size of capillaries in muscle, changes to muscle metabolism, and changes to the buffering capacity of the body so it can withstand a lower, more acidic pH for longer. It is these longer term physiological changes that athletes hope to stimulate by undergoing hypoxia training in an effort to improve their physical performance, and is why human EPO is also used as an illegal performance enhancing drug. 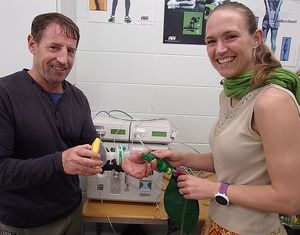 Mike told Our Changing World producer Alison Ballance that ‘what we’re doing with athletes is we’re giving them two stressors. We’re giving them the hypoxia but also the exercise, and the theory there is they’ll adapt a lot better – a lot more and a lot faster – and we have shown it does seem to work with athletes. Exercising under hypoxia does give you beneficial results.’

‘Our first instinct was if we can get people a little more tolerant to exercise maybe they’ll exercise more and that’ll improve their cardiovascular risk profile’ says Catherine.

While Catherine carried out three studies which showed that there did appear to be some benefits such as lowered systolic blood pressure she says that ‘the key message that we found is that exercise is really good for you, so if you can exercise you really should.’

‘The altitude training helped but it also took a lot of time, so if you’re sedentary and want to improve your cardiovascular health, just go and exercise.’

A recent paper published in the 3 July 2014 edition of Nature has revealed an interesting evolutionary twist to how Tibetans have adapted to live at high altitude. While haemoglobin levels in most people rise when they visit high altitudes, Tibetans only increase their haemoglobin levels a limited amount, as too much haemoglobin in the blood can lead to a greater risk of heart disease. The new research traced a pattern of mutations in the gene EPAS1, which regulates haemoglobin, and suggests that the ancestors of modern Tibetans inherited their variant of EPAS1 either from the now extinct Denisovans or their relatives.