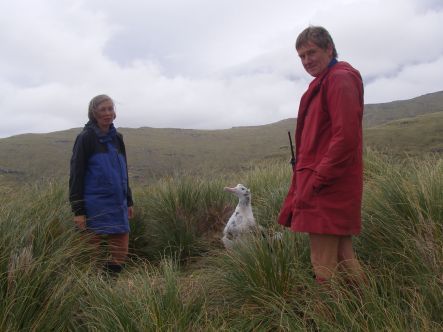 Kath Walker and Graeme Elliott with a Gibson's wandering albatross chick on Adam's Island in the Auckland islands (image: A. Ballance)

Adams Island is the southern-most island in the Auckland Island group, and is one of New Zealand’s most pristine islands. Scientists Kath Walker and Graeme Elliott have been visiting Adams Island each summer since 1991, when they began a long-term study on the Gibson’s wandering albatross, which breeds almost exclusively on this island, and whose breeding success has declined markedly in the past five years.