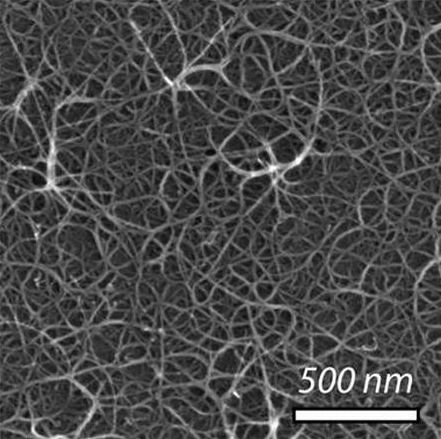 An electron microscope image of carbon nanotubes. For comparison, the width of a human hair is 50 to 100 micro metres.

In the first part in our series about nanotechnology, Julie McPherson (pictured below, on the left), a chemist at the University of Warwick, discusses the use of carbon nanotubes as electrical wires.

The discovery that carbon can form stable, ordered structures other than graphite and diamond sparked an interest in these molecules as potential materials for electronic and other nano-scale devices. 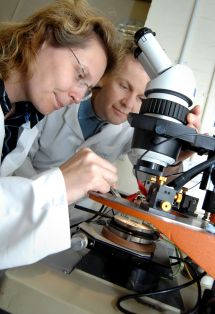 In 1985, Nobel laureate Harry Kroto discovered that stars were producing spherical molecules that were made up of 60 carbon atoms. He called them Buckminster Fullerenes, after the American architect Richard Buckminster Fuller, whose geodesic domes they resemble. C-60 soon became known as a Buckyball, and was followed by Bucky tubes and Bucky onions - all made up entirely of carbon.

The discovery of carbon nanotubes, molecular-scale tubes of graphitic carbon, stimulated interest worldwide when it was discovered that they were among the stiffest and strongest fibres known and could conduct electricity and therefore be used as nano-scale wires.

Julie McPherson visited New Zealand to attend the AMN-4 conference on nanotechnology, organised by the MacDiarmid Institute for Advanced Materials and Nanotechnology, and to talk about her plans to use carbon nanotubes in miniature sensors that measure tiny concentrations of neuro-transmitters in the brain.