Mammals in the Subantarctic 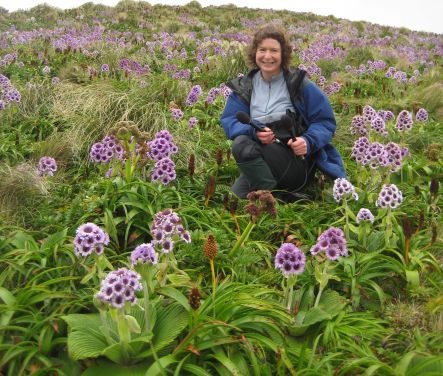 Alison Ballance amidst flowering megaherbs that have flourished on Campbell Island following the removal of feral sheep (image: Sarah Cowhey).

New Zealand's subantarctic islands are a World Heritage site but they are far from pristine. While some mammals, such as goats, pigs and rabbits were introduced deliberately to provide food for ship-wrecked sailors, other animals such as rats and mice arrived accidentally on early sailing ships.

Campbell Island was farmed in the early 1900s, and the feral cattle and sheep were removed in stages between the 1970s and the 1990s. In 2001 Peter McClelland from the Department of Conservation led the world's largest rodent eradication which removed Norway rats from the island.

Adams Island in the Auckland Islands group is free of introduced mammals, and rabbits, mice and cattle have been eradicated from Enderby Island. While goats have been removed, Auckland Island still has mice, pigs and cats, for which the Department of Conservation is planning a major eradication. In January 1999 a Rare Breeds Society expedition removed seventeen pigs which have been bred on the mainland. Auckland Island pigs are virus-free, and considered to have a value in xenotransplants.