The Fate of the Moa 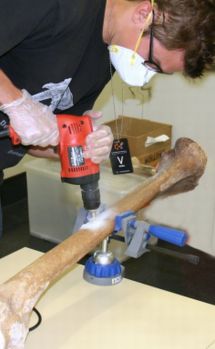 Moa specialist Richard Holdaway studied North Canterbury moa fossils, using the latest in biological technologies, to find out whether moa populations that existed before human settlement were stable or declining.

In the late 1930s, a deposit of moa bones was found at Pyramid Valley swamp in North Canterbury. Sixty five years later, an equally impressive collection was discovered nearby, beneath Bell Hill Vineyard. These two swamps trapped birds of all ages, and included at least four species of moa from a period going back 4000 years.

Holdaway's team, including Morten Allentoft, who is pictured on the left drilling a moa bone for samples, used radiocarbon dating to age the bones and ancient DNA analysis to identify the species of moa, their sex, estimates of population sizes, and family relationships. Carbon and nitrogen isotope data were used to study the diet and habitat of each moa species.