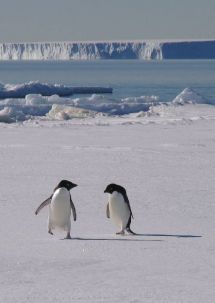 Subfossil bones of Adelie penguins, found underneath existing and abandoned nesting colonies in Antarctica, are so well preserved that they still contain intact DNA.

A comparison of the ancient DNA with that of living birds showed that the rate of evolution in Adelies is up to seven times higher than previous estimates that were based on comparisons between fossils of closely related species.

Further studies showed that the high evolutionary rate is caused by a high mutation rate, but that most of these mutations remain neutral, i.e. they don't result in any changes in the birds' physical appearance

Craig Miller, an evolutionary biologist at the University of Auckland and the Allan Wilson Centre for Molecular Ecology and Evolution says this supports the idea that genotype changes can be uncoupled from phenotype changes