Our Changing World for Thursday 16 January 2014

This summer science highlight is a short excerpt from a one-hour feature on kauri dieback disease - you can find the full audio here.

Five years ago a new plant disease was identified in New Zealand – Phytophthora taxon Agathis, also known as PTA, or kauri dieback disease, which infects and kills giant native kauri trees (Agathis australis). The effects of kauri dieback disease were first noticed 40 years ago in a stand of trees on Great Barrier Island, but the organism was wrongly identified as another species of Phytophthora and it wasn’t until the mid-2000s that the late Ross Beever realised that organism was actually PTA. There is no cure and no vaccination for PTA, which is found only in New Zealand and infects only kauri trees. 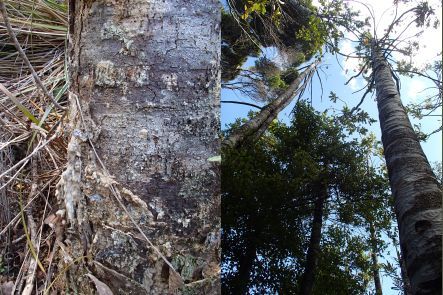 Oozing sap, or gumosis, at the base of the trunk (left) is a sign a kauri tree is infected with kauri dieback, as is the bare canopy of the trees to the right (images: A. Ballance)

PTA is a water-borne Chromista or water mould, belonging to a group of organisms known as Oomycota, which are relatives of fungi. Its spores infect the roots and base of kauri trees, which produce large amounts of sap in response – this gum and canopy dieback are the main diagnostic signs of an infection. Over several years large kauri trees are gradually ‘ringbarked’ by the disease and gradually die. In the last decade kauri dieback disease has become widespread in west Auckland, the Waitakere Ranges and the great kauri forests of Northland. It is still absent from the Coromandel Peninsula, the Hunua ranges and Waiheke Island.

The official kauri dieback programme began in October 2009, a year and a half after PTA was identified as a new disease. It received funding for 5 years of research and management. The kauri dieback programme is a joint agency response that involves the Ministry of Primary Industries, Department of Conservation, Auckland Council, tangata whenua, and Northland, Waikato and Bay of Plenty Regional Councils. Its main message to the public is to protect kauri by cleaning gear and staying on tracks in the forest.

Alison Ballance visits a number of places and people to find out about the disease and its impact. In the Waitakere ranges University of Auckland ecologists Bruce Burns and George Perry are establishing long-term monitoring plots to study the impact of kauri deaths on forest structure. Luitgard Schwendenmann is also beginning long-term work that will look at the impacts of kauri death on carbon storage and litter fall in forests.

Stanley Bellgard at Landcare Research carries out diagnostic work to identify the PTA – this is a slow process that involves ‘baiting’ the spores to plant material. Arborists Martin Herbert and Matthew Priestley from Treescape are often called in to fell kauri trees that have died from PTA and they explain how PTA impacts their work.

Funding for the kauri dieback programme ends in 2014, and Auckland Council is currently lobbying central government in an effort to secure further funding. In the meantime everyone involved with PTA has one clear message for the public: always clean footwear and gear with Trigene when you enter and leave kauri forests, and please stay on the track to avoid spreading the disease in soil on your boots. 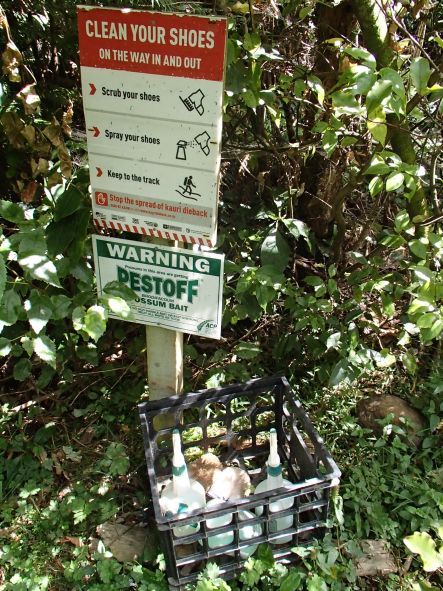 Students from the Centre for Science Communication at the University of Otago learn about the many varied aspects of science communication, including making an audio podcast, and as part of Summer Science we are playing four of these student podcasts. This week's podcast was produced by Thalita van Aswegen, in response to lots of media coverage in July 2013 when the Psychoactive Substances Act came into force, limiting but not outlawing the sale of drugs such as synthetic cannabis.

Thalita talks with post-doctoral researcher Phil Brownjohn from the School of Physical Education, Sport and Exercise Sciences at the University of Otago about the effects of synthetic cannabis, and canvases some opinions about whether or not it should be sold.

This summer science highlight is a short excerpt from a 40-minute feature - you can find the full audio here.

The Three Kings Islands lie just 55 kilometres north of Cape Reinga, but as a team of marine biologists discovered during a two-week expedition in April 2013 these storm-battered islands are a world of their own, with an underwater world that is distinctly different from the nearby mainland.

Alison Ballance joined the Three Kings Islands Marine Expedition on board RV Braveheart, skippered by Matt Jolly, as a team of 14 experts and photographers sampled the marine algae, fish and invertebrates that manage to make these wave-washed shores their home. The discoveries included six new records of fish for the island group, an unusual stalked jellyfish and numerous types of seaweed, many of them rare and undescribed.

Half-banded perch amongst sponges and ascidians, and Malcolm Francis and Roberta D'Archino next to archway and cliffs in the Princes Islands - the white 'dusting' on top of the island is a large colony of gannets (underwater image: M. Francis & topside image: A. Ballance)

Roberta D’Archino from NIWA and Wendy Nelson from the University of Auckland and NIWA are marine algae (seaweed) experts. Malcolm Francis is a fish biologist at NIWA, and Kareen Schnabel looks after NIWA’s marine invertebrate collection. Vincent Zintzen is a researcher and Jeremy Barker is a research technician, both from Te Papa, and Libby Liggins is a PhD student at the University of Queensland. 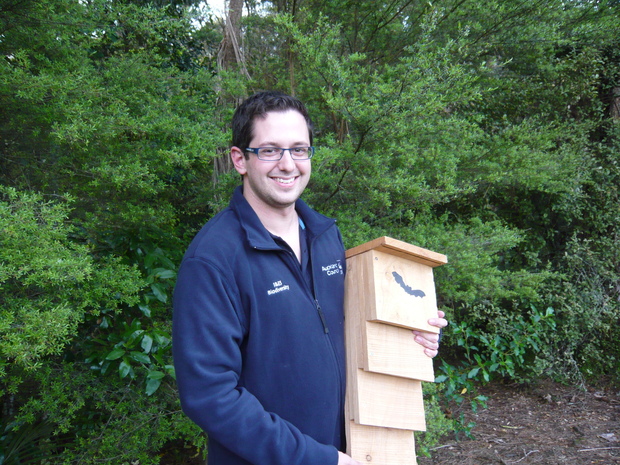 We will be back next week with a new series of Our Changing World for 2014.