Our Changing World for Thursday 26 December 2013

From all of us at Our Changing World, best wishes for 2014.

Ruth Beran interviewing in front of the barbeque and Robert Holt standing next to the electrolyser.

On Matiu Somes Island in Wellington Harbour, the Department of Conservation has installed a renewable energy system which has made a diesel powered generator practically redundant.

The ‘HyLink’ distributed hydrogen energy system, created by Callaghan Innovation, captures renewable energy from a small wind turbine or photovoltaic solar cells. Any energy in excess of that stored by batteries powers an electrolyser that extracts hydrogen from water by separating it into hydrogen and oxygen molecules.

The system stores hydrogen in an “earth battery”, consisting of two cylinders, under the ground. Currently, the hydrogen powers a small barbeque, but in the future could be used to fuel a hot water system for staff, and another larger barbeque in the main entertainment centre.

The system is a prototype, but if commercialised could potentially be used in remote communities in New Zealand, or in the Pacific Islands, where LPG is used to fuel home cooking but is expensive to transport. A commercial Hylink system could power cooking for five families. The advantage of using hydrogen for cooking is that it produces no carbon dioxide, just steam, although this creates its own problems as hydrogen burns with an almost invisible flame.

Ruth Beran meets Robert Holt from Callaghan Innovation to see how the system works and brings some sausages along to test the barbeque.

Listen to a previous story about the Hylink distributed hydrogen energy system in the farming community of Totara Valley on Our Changing World here.

Students from the School of Science Communication at the University of Otago learn about the many varied aspects of science communication, including making an audio podcast, and as part of Summer Science we are playing four of these student podcasts. This week's podcast was produced by Asia Rattenbury, and investigates cycling safety in Dunedin. Following the deaths of several cyclists on city streets the Dunedin City Council is currently looking at options for cycle lanes to improve safety. Asia talks with Charlotte Flaherty, who is Safe and Sustainable Travel Coordinator at  the Dunedin City Council, and injury epidemiologist Hank Weiss, who is spokesperson for cycle lobby group SPOKES-Dunedin.

The Plight of Long-finned Eels 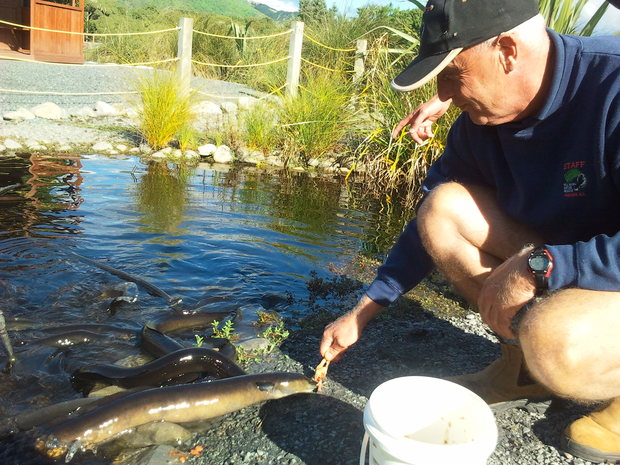 Long-finned eels may not be our most charismatic native species, but they certainly made the headlines this year.

In April, the Parliamentary Commissioner for the Environment, Jan Wright, released a report in which she highlights three main causes that have contributed to a decline in long-finned eel numbers: deteriorating water quality, barriers to their annual migration and commercial fishing. She called for a moratorium on the fishery and recommend changes to the management of waterways to stop longfins from becoming fuctionally extinct.

Of the three species of freshwater eel found in New Zealand, the long-finned eel, Anguilla dieffenbachii, is the only one that is endemic, i.e. found only in our rivers and streams. Longfins are also the largest of all eel species and the only eel in the world whose precise breeding ground remains a mystery.

Longfins spend most of their lives, sometimes 80 years or more, in freshwater. They spawn once, at the end of their life, after migrating thousands of kilometres north towards Tonga and transforming their entire body for this final act of reproduction.

In this feature, Jan Wright outlines why she thinks that long-finned eels may have already begun their path to extinction. NIWA freshwater fisheries scientist Don Jellyman, who has dedicated his career to studying eels, discusses his efforts to track migrating females and his ongoing, but so far fruitless, search for larval stages in the ocean. Pataka Moore, a lecturer in environmental sciences at the Wananga o Raukawa, explores the cultural significance of eels, or tuna, and Massey University freshwater ecologist and member of Manaaki Tuna, Mike Joy, lends his support for a moratorium on commercial harvests.

Since the release of the report, the government has appointed an expert panel to review the fishing industry. In its report, it says that the longfin eel population is highly uncertain, that eel stocks declined from the early 1990s until the late 2000s, but that the decline slowed down since then. The panel also suggested additional methods of assessment and monitoring. 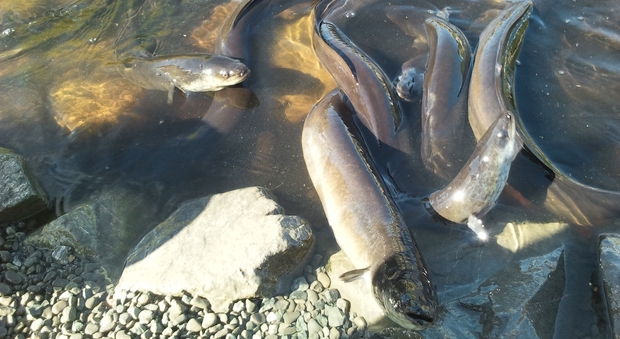 A pair of yellow-eyed penguins (left) sky-calling in an ecstatic display, and a group of penguins heading out to sea to feed in the morning (images: A. Ballance)

Hoiho - the ‘noise shouters’ or yellow-eyed penguins – are among the world’s rarest penguins. They’re found on the east coast of southern South Island and on Stewart Island, where they face challenges from predators, habitat loss and disease. They also live in the remote subantarctic, which has long been considered their stronghold. But only one count has ever been made of their numbers at subantarctic Campbell and Auckland islands, and that was by Peter Moore back in the late 1980s.

So in November 2012 the Department of Conservation and the Yellow-eyed Penguin Trust teamed up with six paying volunteers to carry out a survey of yellow-eyed penguins at the Auckland islands, and Alison Ballance went along to help with the counting. The counting was carried out as a series of beach and coast counts between 5 and 9 am each morning, and sites surveyed included Enderby Island, Ewing Island, Rose Island and Adams Island, along with North Harbour, Matheson’s Bay and Waterfall Bay on the main Auckland Island. During the survey the penguins were incubating eggs.

Although it is difficult to draw conclusions from just two surveys carried out 23 years apart preliminary results show that yellow-eyed penguin numbers in the Auckland Islands may have declined by a third from 1989 to 2012. A similar survey was also carried out on Campbell Island during November 2012 but those results have yet to be analysed. A further expedition returned to count yellow-eyed penguins in November 2013, but there are no results as yet. 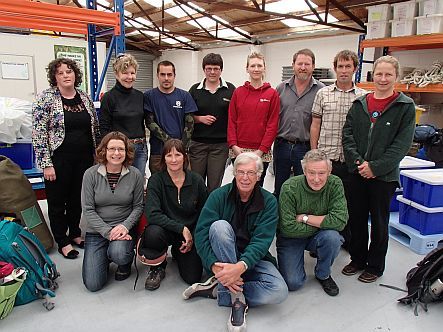 Expedition leader was Jo Hiscock from the Department of Conservation. The expedition was based on the yacht Evohe, skippered by Steve Kafka.

Alison kept a blog which was posted on the Yellow-eyed Penguin Trust’s web page while the expedition was underway.