Our Changing World for Thursday 20 June 2013

Parents who have trouble keeping a patch on a child who suffers from lazy eye or amblyopia may soon breathe a sigh of relief with the development of a ground-breaking Tetris treatment in New Zealand. Current treatment options are limited for children and largely non-existent for adults, largely because the adult brain was not thought to have sufficient capacity for change after the critical period of visual development. However, through previous research and testing, Ben Thompson from the University of Auckland’s Department of Optometry and Vision Science has been able to demonstrate that the adult brain does have sufficient plasticity that can be manipulated to allow improved function of the amblyopic eye. In a world first, Ben Thompson, together with his team at the Visual Neuroscience Laboratory, has discovered that playing Tetris under controlled conditions has demonstrated fast improvements in vision in both children and adults with amblyopia and the improvements have so far proven to last at least three months.

A titanium rescue knife and scabbard. Both have been coated using ion implantation.

Unlike gases which have large spaces between atoms, solids are generally thought to have atoms that are tightly bound together. But at GNS Science in Gracefield, just out of Wellington, ion beams are being used to force atoms into solid materials.

This process, called ion implantation, changes the properties of the solid, for example making the target harder, or more compatible with the human body.

Ruth Beran meets John Futter to see some of the projects being worked on, including laser sintered (3D printed) titanium rescue knives which have been made incredibly strong using ion implantation.

Since six kaka were reintroduced to Zealandia in central Wellington in 2002, their numbers – boosted by some more reintroductions – have climbed to around 200, although they’re hard to count as they fly freely in and out of the fenced sanctuary. These large native forest parrots have become a common sight around the central city, frequenting parks, the botanic gardens, the town belt and suburban gardens. The bird pictured at left is an adult male North Island kaka (image © Albert Aanensen from NZ Birds Online)

Their habit of stripping bark to get at sap has been causing damage to some large trees such as eucalypts and macrocarpas, and Wellington Botanic Gardens staff have had to remove some dying branches to prevent them falling. The kaka also feed on seeds and cones on old pine trees.

Victoria University of Wellington master’s student Kerry Charles looked at the impact of these urban kaka on city trees, documenting damage, observing kaka feeding and trying to work out which birds were doing the sap feeding and what kind of trees they favoured. She tells Alison Ballance that she made 40 observations of birds sap feeding, and found that birds of both sexes and all ages were involved, including birds that were also regularly easting supplementary food at Zealandia. They favoured exotic trees in prominent positions on ridge tops. Kerry’s advice to Wellington City Council has been to consider a phased-in replacement of exotic trees with natives. 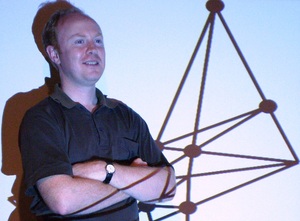 As part of the Royal Society of New Zealand’s 10x10 lecture series, marking International Year of Mathematics, Dillon Mayhew (right) presented a lecture on Codes and ciphers – the mathematics of the internet in Rotorua on 20 June.

Dillon Mayhew is both a mathematician at Victoria University and a musician. His mathematical interest lies in abstract mathematical constructs called matroids and you can listen to a previous Our Changing World interview with him here. He is also a French horn player and is a contract musician with the New Zealand Symphony Orchestra.

Ruth Beran meets him before a rehearsal to find out more about codes and ciphers, and he explains how we can transmit huge volumes of information across the internet securely and why prime numbers are important for securely encrypting personal data.