Our Changing World for Thursday 6 June 2013 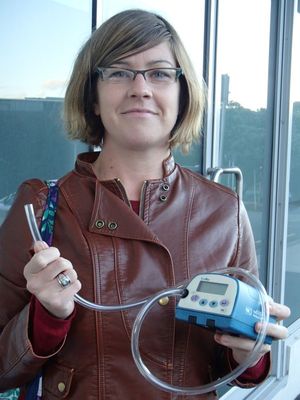 In March 2011 the New Zealand government committed to a goal of New Zealand becoming essentially smokefree by 2025, and earlier this year they announced some ambitious mid-term goals. Smoking is already banned in workplaces and indoor areas in pubs and restaurants, and several city councils are now considering smoking bans in public places such as playgrounds, city streets and beaches. Such bans have already been introduced in some Australian and United States cities.

The Department of Public Health at the University of Otago, Wellington has been researching smoking and air quality for many years, and in tonight’s programme we are looking at some of their work.

Alison Ballance meets research fellow Amber Pearson (pictured above with an aerosol monitor. Image: A. Ballance) outside a busy restaurant in central Wellington to hear how she and colleague are assessing smoke drift by measuring fine particulate levels using aerosol monitors – one person sits outside in the designated smoking area while the other sits inside the restaurant, and they note how many people are smoking so that can be related to air quality. The work on smoke drift in restaurants follows on from a similar study in Wellington bars.

Nick Wilson from the Department of Public Health at the University of Otago tells Alison Ballance why cigarette smoke has such harmful health effects, and why he and his colleagues believe tougher anti-smoking measures should be implemented in public places, as well as a ban on smoking in cars containing children.

The fifteen medical students who conducted the study, with Chris Kenny in the middle row, two from the right, and Alex Kao in the back row, far left.

During April, fifteen fourth-year medical students from the University of Otago, Wellington took to the streets to measure how many people are smoking in licenced pavement leases outside bars in Wellington's CBD. Using iPhones, smart phones and tablets, the students collected observational data over a 15-minute period twice a day (12-1pm and 7-8pm) for a total of eight observation periods.  Surveys were also conducted to gauge public opinion and interviews provided views on the potential for smokefree outdoor area policy.

Observations showed 16% of people standing in licenses areas outside bars were smoking, with more people smoking in the evening than at noon. Most of the people surveyed who had never smoked, or who were ex-smokers, felt ‘negatively’ about smoking in outdoor areas, current/social smokers felt ‘indifferent’ or ‘positively’. People who had never smoked and ex-smokers (68% and 71%) were supportive of smokefree outdoor area policy, while current/social smokers had mixed views (23% supported, 23% indifferent, 48% opposed).

The New Zealand Association of Scientists focused its recent annual conference on the question of how we measure and predict the contribution science makes to our lives, be it in an economic sense or through non-commercial benefits. Scientists and policymakers grappled with tough issues such as the increasing commercialisation of science, engineering and technology, the cultural values we place on knowledge and the difficulties in predicting non-economic outcomes of science.

In this interview, Victoria University physicist Shaun Hendy, climate scientist James Renwick and poet Helen Heath discuss whether markets and economic models are good tools for predicting the impact scientific research can have on our wealth, health and culture. You can also listen back to recordings of the presentation and discussions held during the NZAS conference here.

New Zealand Birds Online is a new website that was launched at the Ornithological Society of New Zealand’s 2013 conference. Colin Miskelly at Te Papa has led the two-year effort to build a website and populate it with information, photographs and sound clips of 457 birds, which is every bird that has ever been recorded in New Zealand, including some extinct species.

The website has a number of special features – Identify that Bird is aimed at people who do not know the name of the bird they are trying to identify, and uses habitats and then photos to guide them to the bird.

Dedicated twitchers, on the other hand, can head to Location to print out ‘tick lists’ which are lists of every species recorded at a particular location.