Most people use electronic devices every day, so it’s not really surprising that every major criminal investigation by the New Zealand Police has an electronic component. This evidence is processed at the Electronic Crime Laboratory, housed in a secret location in Wellington, and Ruth Beran meets Maarten Kleintjes, Manager of the National e-Crime Group who takes her on a tour.

The first thing she sees is a large number of servers behind a glass wall which can store huge amounts of data. When police seize a computer or electronic device they create an exact copy and examine it through their own computers, which is why they need such a large amount of storage space. Making a clone of the device protects the police’s servers from any malware that might be on the computers and also allows the forensic electronic specialists to examine the alleged offender’s system without the risk of tampering with evidence. The system used to analyse electronic data is called EVE – the Environment for Virtualised Evidence.

The e-Crime Lab also examines mobile phones, which may have been smashed or locked, and this can mean the mobile phone has to be disassembled and the memory chip taken out to be examined.

Nic Boyd shows Ruth Beran the room where audio is forensically examined and explains how it is sometimes necessary to remove background noise to hear crucial information properly.

There are 17 herbaria in New Zealand, collections of dried plant specimens kept in dark, temperature-controlled rooms at different locations around the country. Now 11 herbaria have combined forces to create the New Zealand Virtual Herbarium, an electronic collection of the data that accompanies each specimen. Although it’s still a work in process you can access distribution records for over 700,000 plant specimens  - all from the comfort of your own computer.

For a guided tour of both a real and virtual herbarium Alison Ballance heads to Auckland Museum to meet curator of botany Ewen Cameron. 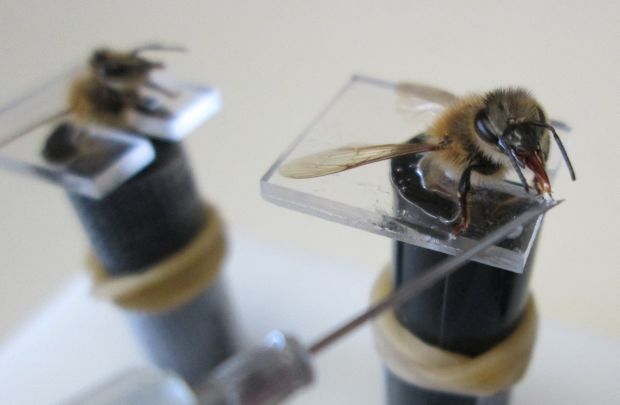 Sniffer bees in training are exposed to particular chemcial odours and then rewarded with sugar water when they stick out their proboscis - the bee at right has its proboscis out and is drinking sugar water from a needle and syringe (image: J. Thia)

Three weeks ago on Our Changing World we heard how important honeybees are as pollinators and honey producers, and at the end of last year we heard how bees could be taught to detect TB. Well, now these versatile insects are being trained as potential biosecurity agents to detect volatile compounds emitted by apple trees when they are being attacked by infestations of light brown apple moth caterpillars.

Alison Ballance heads to Plant and Food Research at Lincoln where Max Suckling and summer student Josh Thia show her how you train a bee. Honeybees are restrained in a plastic holder, and then exposed to an airstream containing a particular chemical odour. If the bee sticks out its tongue (the Proboscis Extension Reflex) then it is rewarded with sugar water. The bee is trained over a few exposures to the odour, and about 60% of bees seem able to learn to recognise a particular odour, sticking out their tongue once they have smelt it.

Max also shows Alison a set-up outside where he is training entire hives to act as biosecurity agents to find infested apple trees. 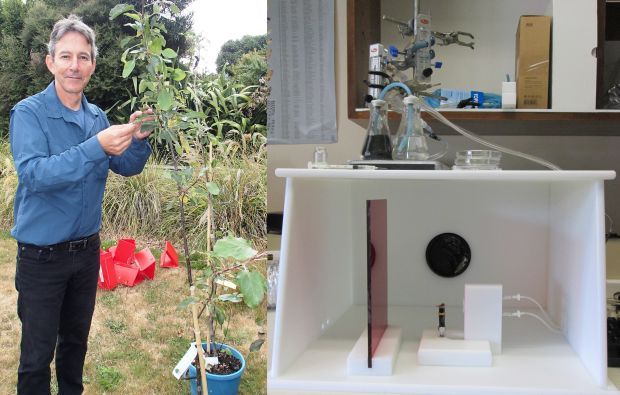 Max Suckling next to an infested seedling apple tree that is used to train whole hives of bees outside, and the training set-up in the lab for individual bees (images: A. Ballance left, and J. Thia right)