Our Changing World for Thursday 14 February 2013

The Wellington Forensic Service Centre is part of Environmental Science and Research, and Steve takes Ruth Beran on a tour.

The first specialist room she visits is set up for the examination of unknown powders. Rosie shows Ruth this room and outlines that white powders could be chemicals, explosives, drugs, or innocuous substances such as household products. Highly hazardous substances can be examined in this room without danger to the person looking at it. While there aren’t any hazardous substances to view, Rosie demonstrates some innocuous substances and explains that these substances can sometimes cause just as much concern as a harmful sample. Simple tests on the powders can involve looking at their pH, or the structure of the substance under the microscope. More complex tests to work out structure can involve gas chromatograph mass spectrometry.

Nicola then shows Ruth one of the five search rooms where evidence from crime scenes are analysed. Items are examined separately so there is no chance of cross contamination. Nicola demonstrates how she gowns up before going into a room, to make sure that she too does not contaminate any evidence. Evidence examined in these rooms can inform the police in the investigation stage and also potentially be used in court cases. All sorts of evidence is examined in these rooms, from clothing, bedding, weapons, firearms, shoes, to bits of grass, magazines, or hair.

Tune in next week for Part Two of the tour of the forensic laboratory.

Sarah Bastin amongst liquefaction in the back yard of her supervisor Mark Quigley’s red-zoned home, and Sarah standing in a grassed-over crack in Sullivan Park in Avonside. The crack was created when subsurface liquefaction caused the ground to slump into the nearby Avon River (images: A. Ballance)

One of the infamous side-effects of the recent 2010-11Christchurch earthquake sequence was liquefaction. It led to a significant number of homes in the eastern suburbs being red-stickered, and the land declared unsuitable for rebuilding.

Canterbury University earthquake geologist Mark Quigley won the 2011 Prime Minister's Science Media Communication Prize and the 2011 New Zealand Association of Scientist’s Science Communicator’s Award for his work with the media to explain what was happening. He has also been leading a team of researchers looking at various aspects of earthquake geology around Canterbury, and one of his PhD students Sarah Bastin has been looking at liquefaction.

During her investigations into recent liquefaction, Sarah uncovered previous palaeo-liquefaction events related to earthquakes that happened hundreds of years ago. She takes Alison Ballance to the site of her discoveries, in the back garden of Mark Quigley’s red-zoned Avonside property, which he nicknamed the Avonside Liquefaction Laboratory.

Research by Sarah and Mark into recent liquefaction has just been published online in the journal Geology: ‘Recurrent liquefaction in Christchurch, New Zealand, during the Canterbury earthquake sequence’ by Mark Quigley, Sarah Bastin and Brendon A. Bradley.

Humans are unique among mammals in producing milk with significant concentrations of small sugars, called oligosaccharides, which don't feed the baby but instead nourish the bacteria in the baby's gut. Cow's and goat's milk, the basic ingredients in infant formula, contain smaller amounts and a different composition of these sugars.

University of Otago microbiologist Gerald Tannock, who last year became a Royal Society of New Zealand fellow, has found that the community of bacteria in an infant's intestines differs depending on whether the baby is breast-fed or bottle-fed, and that bifidobacteria dominate in the bowel microflora of healthy breast-fed babies. He has teamed up with Callaghan Innovation chemist Ian Sims to develop new recipes for formula that will mimic the bacteria-enriching effect of breast milk. The team will select oligosaccharides that resemble human milk oligosaccharides from waste materials and natural sources such as seaweeds.

In addition, the research will test the effects of these novel carbohydrates on bifidobacterial physiology. The physiological effects on the bacteria will be measured and the impact of these physiological effects on the interplay between different kinds of bifidobacteria will be monitored. Mathematical models generated from the data will help to predict the outcome on bowel ecology of adding carbohydrates to infant formula. 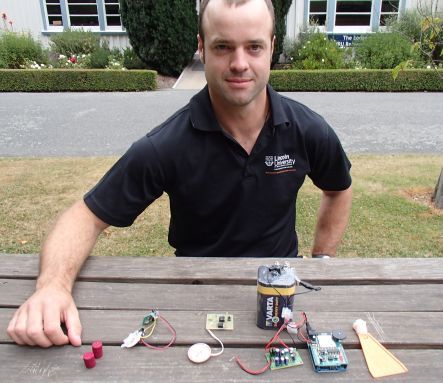 Matt Kavermann with some of the devices developed and tested during his PhD research (left to right): baits containing rodamine dye, three versions of device to play audio (the smallest one at left is the most recent prototype), and a wax tag that records tooth marks of animals that chew on it (image: A.Ballance)

The idea of a pest-free New Zealand has been in the news a lot – the late Sir Paul Callaghan championed the idea, and philanthropist Gareth Morgan has recently weighed in with support for making Stewart Island predator-free, as well as his Million Dollar Mouse campaign to eradicate mice from Antipodes Island. But it’s easy to say ‘let’s do it’ – the harder bit is working out how. Trapping and poisoning are the two most effective methods, but much more work needs to be done to make them as efficient as possible. One of the hardest aspects is coming up with a suitable lure to attract animals such as possums to the trap or bait – traditional lures for possum, for example are based on smell and include flour, sometimes mixed with icing sugar, as well as cinnamon.

The search for more effective lures has been exercising the minds of a number of wildlife biologists from different research organisations, including Matt Kavermann from the Centre for Wildlife Management and Conservation at Lincoln University, who tells Alison Ballance how his research into ‘noisy possum traps’ developed over the course of his just-completed PhD. Matt tested audio lures featuring the begging calls of mohua chicks, but eventually settled on a simple 300-hertz beep (that sounds like a reversing truck), which proved very effective in attracting possums and encouraging them to interact with bait stations and kill traps.

Click here to find the blog of the Centre for Wildlife Conservation and Management.

The Goodnature self-resetting possum traps mentioned in Matt’s interview were featured in a previous Our Changing World story – you can find that audio here.