Our Changing World for Thursday 31 January 2013

The red-billed gull chick (left) has a metal leg band put on by researcher Jim Mills (image: A. Ballance)

Biologist Jim Mills has been studying red-billed gulls at Kaikoura for the last 49 years. Every summer since 1964 Jim and various assistants, including his wife Deborah, have visited the gull colony for several months to record the breeding success of colour-banded gulls and their offspring. Jim currently has around 500 colour-banded birds, and over the course of the study he has banded more than 5000 birds. This is one of only a few studies world-wide that have been going for so long, and for the last couple of decades Jim and Deborah have carried out the field work in their own time.

This long term data set, which covers up to seven generations of birds in the same family, has yielded much surprising information about the birds. The longest lived bird in the study was 31 years old, with many birds reaching 29 or 30 years. There have been no recorded cases of inbreeding, and most birds are very monogamous, having just one or two partners during their life. Only 3% of clutches have eggs fathered by a male other than the male at the nest.

During the study the gull colony at Kaikoura has declined by 51%, due to predation by cats and ferrets, as well as a succession of El Nino events during which warm water prevented gulls reaching their favoured food of krill, causing breeding to fail. A recent paper in Notornis shows that during the same period the number of breeding red-billed gulls in Otago has risen dramatically.

Data from the gulls was recently combined with that from other long-term seabird studies in a landmark paper published in Science that showed that successful long-term seabird breeding relied on forage fish stocks being maintained at one third of the maximum prey biomass. 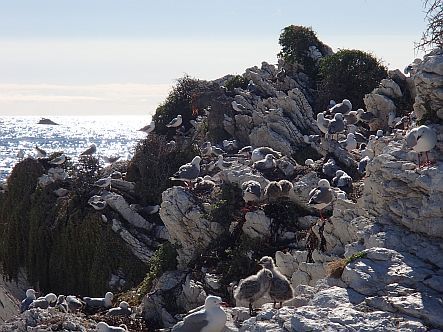 Red-billed gull colony at Kaikoura, late in the breeding season with chicks that are a few days away from fledging (image: A. Ballance) 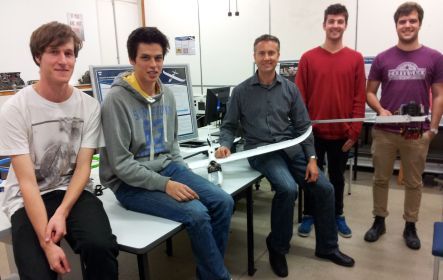 Control engineering is the ability to change the motion or dynamics of a system to make it perform the way you want. It deals with autonomous systems, so some examples are cruise control in a car, autopilot in a plane and unmanned aerial vehicles.

As part of their engineering degrees at the University of Auckland, fourth year students James Kutia and Keagen Sorrell worked together for six months on the autonomous flight of a model fixed-wing aircraft. Supervised by Karl Stol, the aim was to make the model plane follow a line, which could be useful in real-life situations such as surveillance of grape vines, crops, power lines or roads.

The system uses a camera on board the model plane which feeds back to a computer on board the aircraft and also to a laptop on the ground, as the data is computationally expensive. Data is then fed back to actuators which can regulate flight. Algorisms have to be used to extract the line from the camera image and use it so the plane can follow the line. Vision based line following wasn’t tested, but the plane was tested at Auckland Domain and Whenuapai Airbase for GPS, and it was found that results were dependent on wind speeds. Next year students will work on testing and refining the systems, and possibly the high level line following controller.

Nick Corlett and Francis Collier worked on a model of the Martin jetpack, and in this web only special, Ruth Beran also speaks with them about their control engineering project.

Animals perform great feats of migration. Godwits fly from New Zealand to Alaska and back each year, blue whales travel the world’s oceans, and homing pigeons return with unerring accuracy to their loft. But how do they navigate so accurately without the aid of the maps and GPSs that we humans rely on?

It’s a question that has long intrigued biologist Michael Walker, who runs the Behaviour in Space and Time Laboratory at the University of Auckland, and over the last few years he has gathered increasing evidence that animals are able to follow the earth’s lines of magnetism, using their own in-built magnetic detectors.  More recently applied mathematician Claire Postlethwaite has also been pondering the mysteries of animal navigation, and with funding from a 2011 Marsden Fund Fast-Start grant she has developed a simple geometric model of navigation, based on a logical pattern of errors that Michael detected in both his own homing pigeon data and in other researchers’ data.

Alison Ballance visits the pair to find out how magnetism, the search for longitude and volcanoes come into the story.

This is another Our Changing World story to mark 2013 as the Mathematics of Planet Earth.

Michael Walker also talked recently to Te Ahi Kaa about the Tuakana mentoring scheme he established at the University of Auckland for Maori and Pacific science students, and about winning the Prime Minister’s Supreme Award at the 2011 National Tertiary Teaching Excellence Awards.

The Alpine Fault runs parallel to and just inland of much of the west coast of New Zealand's South Island. This view was created by the Shuttle Radar Topography Mission aboard the Space Shuttle Endeavour and is almost 500 kilometers wide. (image: NASA)

New Zealand straddles the Australian and the Pacific tectonic plates, and the collision zone produces fault lines throughout the country. The largest of these is the Alpine Fault, which runs for more than 600km along the spine of the South Island and is so large that it is visible from space.

The Alpine Fault is similar in character to the San Andreas Fault in the US or the North Anatolian Fault in Turkey. However, it differs in the fact that rapid uplift and mountain building has exhumed fault rocks from the deep, and that earthquake activity is restricted to shallower depths. It also seems to have an unusally regular rhythm. GNS Science geologists found that the Alpine Fault ruptures every 200 to 400 years in an earthquake close to magnitude 8. They found evidence of 24 ruptures dating back to 6000BC. The last major quake is thought to have happened in 1717. 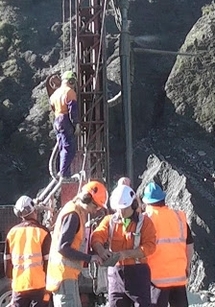 A New Zealand-led international team of geologists is getting ready for the second phase of the Deep Fault Driling Project, which aims to drill 1500 metres deep into the fault zone in a quest to better understand how earthquakes occur. They plan to collect and analyse rock samples and core as well as geophysical information, such as how the fluids inside pores in the rocks behave. During the first phase the team drilled two boreholes more than 100 metres deep (see image on left) and installed permanent instruments to create underground fault-zone observatories that take  images, measure physical and chemical conditions at various depths and detect any movement.

GNS Science geologist Rupert Sutherland explains the overall goals of the project and some of the first results, which have been published in the journal Geology recently and describe the role of fluids in controlling the architecture of the Alpine Fault. David Prior, a geologist at the University of Otago, discusses his work on rocks that have been exhumed from deeper layers and what they can tell us about earthquake processes.

University of Otago geologist David Prior studies rocks that have been exhumed from deep in the Alpine Fault.