Massey University PhD student Zac Schlader and supervisor Toby Mündel have been looking at the impact of skin temperature on athletic performance.

Using a hot chamber with desert temperatures of 40˚C, and a body suit with tubes containing water and antifreeze allowing it to reach temperatures of -10˚C, they have shown that the perception of being cold can increase an athletes' exercise intensity, and heating the skin can slow them down.

Core body temperature has traditionally been thought to be the key temperature driving athletic performance, but skin temperature also appears to be having an effect, and means that tricking the body's perception, with products like menthol to make the skin feel cooler, could result in better race performance. 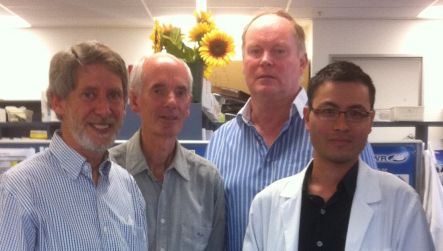 A new predictive biomarker for blood pressure is being developed through a collaboration between Canterbury Scientific, Cambridge University, Canterbury Health Laboroatory, and the University of Otago, Christchurch.

While the test is still in the early stages of development, it is possible that it could be used to predict conditions, such as pre-eclampsia in pregnant women, in the future.

Ruth Beran speaks with collaborators Peter George from Canterbury Health Laboratories and Darryl Wang and Tim Yandle, from the University of Otago, Chrischurch. First though, she speaks with Neil Pattinson and Maurice Owen from Canterbury Scientific, a company which has built its fortunes on diagnostic tests, in particular, liquid haemoglobin controls which are used to calibrate laboratory machines which test for conditions like diabetes. The company recently opened its new $1.2 million facility in the Christchurch suburb of Addington, and they describe how the building survived the recent earthquakes.

Marta Camps with an image of biochar showing a honeycomb network of pores, and Jim Jones with handfuls of biochar (images: A. Ballance)

The New Zealand Biochar Research Institute at Massey University is one of a number of research groups world-wide looking at biochar, which is charcoal made to be added to the soil to improve its properties. Charcoal lasts a long time in the soil, and it is thought that it could be a way of sequestering carbon, as well as a mechanism to improve soil fertility and function.

Soil biologist Marta Camps is leading a large team of graduate students investigating the effects of different kinds of biochar on soil properties and plant growth, and also whether biochar could help remediate contaminated sites.

Chemical engineer Jim Jones is investigating techniques for the efficient pyrolosis of feedstocks such as wood and sewage sludge to produce biochar. He is also researching efficient ways of getting the resulting biochar into the soil

Jim Jones shows Alison Ballance some biochar produced from pine plantation waste, and Marta Camps talks about some of the exciting possibilities for biochar, and why it's important to add value to make the biochar multifunctional and cost-effective.

Peter Bishop with a lab scale pyroliser, and Tao Wang's experiment looking at the effect on grass growth of phosphorous-rich biochar treated at different temperatures. (images: A. Ballance)