Our Changing World for Thursday 23 December 2010

Sir Peter Gluckman is New Zealand's inaugural Chief Science Advisor to the Prime Minister. Sir Peter's research area is in developmental endocrinology and neuroscience, and before taking on the Chief Science Advisory role he was Director of the Liggins Institute, and the National Research Centre for Growth and Development. He has also held the position of Dean of the Faculty of Medicine and Health Sciences at the University of Auckland.

His recent visit to Antarctica through Antarctica New Zealand's Distinguished Visitor programme coincided with Alison Ballance's visit, and while they were down on the ice she took the opportunity to talk with him about his early research career. Because of Sir Peter's connections with Sir Edmund Hillary they spoke in the TAE/IGY hut, which was part of the original base for the 1957-58 British Trans Antarctic Expedition Ross Island team, led by Sir Ed. The extended web version of the conversation includes Sir Peter's views on basic and applied research, and how 'curiosity must be a key starting point for innovation'.

His early Himalayan research on iodine deficiency remains relevant today, as a reduction in the use of iodised table salt has seen a recent rise in iodine deficiency in New Zealand. Alison notes there was a curious irony in talking to a scientist whose research has focused on human foetal development on a continent with just one recorded human birth.

Sir Peter makes reference to his colleague and collaborator the late Sir Graham (Mont) Liggins - listen here to an interview with Mont Liggin which was replayed on Our Changing World following his death in August. 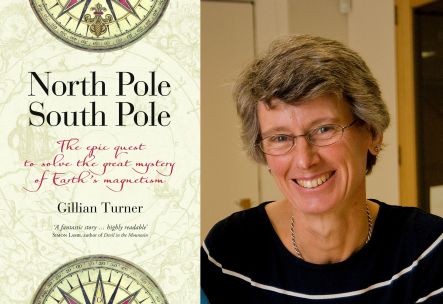 Gillian Turner, a lecturer at Victoria University and the author of a book about magnetism. (images: courtesy of Gillian Turner)

The question of why our planet is magnetic has occupied some of the world's greatest scientific minds for centuries, prompting Albert Einstein to call it one of the last great unresolved mysteries of physics in his time. The story starts with Magnes, a legendary Greek shepherd whose iron-studded boots were attracted to magnetised lodestone rocks, and it threads through history to modern physicists and their data-crunching supercomputers which finally helped make sense of observations and geological records.

North Pole South Pole, published by Awa Press, charts the scientific quest to understand magnetism. The book's author, Victoria University geophysics lecturer Gillian Turner, has studied and worked with some of the scientists whose work helped to solve the puzzle. Her own research is focused on investigating how and why the Earth's poles reverse. In this interview she introduces some of her favourite real-life characters from the book, including Michael Faraday, who came to science by accident and without any academic training, but made some of the most significant contributions to our understanding of electromagnetism. He is also remembered for founding the Royal Institution's Christmas lectures for children.

In April, Our Changing World brought you the story of Arthur Andrews, who went under the knife to try and ameliorate a range of health problems. His surgeon, Richard Stubbs, performed a gastric bypass operation, dividing Arthur's stomach into a small upper pouch and a larger pouch below, as well as re-arranging his small intestine. Listen to that previous story here.

The result? Arthur's stomach can now only hold a handful of food, and not surprisingly he has lost quite a bit of weight. But the operation may also have had a far greater effect.

He believes that a yet-to-be identified hormone released by the gut, a molecule he's dubbed 'Factor X' is antagonistic to insulin, its over-production results in insulin resistance, leading to Type 2 diabetes.

To find out how much weight Arthur has lost, and to see if the operation has cured his diabetes, Ruth Beran sits in on a follow-up consultation at Wakefield Hospital with nurse Bridget Leppein.

Updating the Birds and Bees

We follow up on a few of this year's stories to find out what's been happening since they last featured on Our Changing World. The Integrated Ocean Drilling Program (IODP) drilling ship the JOIDES Resolution was in Auckland last week, and the NZ IODP Co-ordinator, Giuseppe Cortese from GNS talks about the just-completed microbe-focused South Pacific Gyre expedition, and the Louisville Seamount Trail expedition which is underway at the moment.

Last summer Nikki Gammans from the UK's Bumblebee Conservation Trust and New Zealand bumblebee breeder Rosemary Read made a pioneering attempt to breed short-haired bumblebees for repatriation to the UK, where they are extinct in the wild. Unfortunately the hibernating queens died just before they were due to be shipped round the world. Nikki Gammans explains the different approach they are taking with the bumblebees this summer.

Alison Ballance finds out from the Department of Conservation what rare birds on the Chatham Islands are up to this summer, and talks with Liz Tuanui, chair of the Taiko Trust, about the unknown taiko that is digging a burrow within the predator-fence at Sweetwater, and finds out how the translocated tui are faring.

Veronika Meduna catches up with Karen Pollard, astronomer at the University of Canterbury, about her recent 'singing star' mission.