Our Changing World for Thursday 22 April 2010

Richard Stubbs, head of the Wakefield Biomedical Research Unit at the University of Otago, Wellington, is convinced that the cure for Type 2 diabetes lies in a yet-to-be identified hormone released by the gut: a molecule which he has dubbed "Factor X".

After conducting hundreds of gastric bypass operations, he has observed (pdf) that six days after the operation many patients no longer have Type 2 diabetes. His hypothesis is that because 'Factor X' is antagonistic to insulin, its over-production results in insulin resistance, leading to Type 2 diabetes.

Sixty eight year-old Arthur Andrews believes the only way to solve his health issues is to undergo a gastric bypass. Ruth Beran meets Arthur Andrews before the operation, goes into theatre to watch as Richard Stubbs operates on him, and then goes back to the hospital six days later to find out how the operation went.

Victoria University of Wellington geographer David Kennedy is interested in coastal processes, and how different kinds of coastlines respond to the various forces at work on them. Alison Ballance joins him on Wellington's South Coast to talk about rocky shores, Cook Strait storms, tsunami uplift and erosion rates. 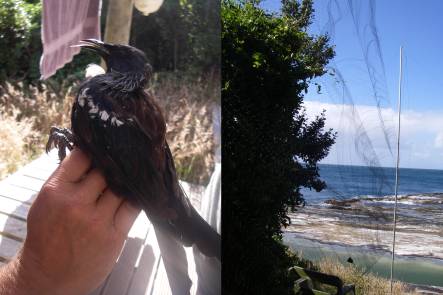 The endemic Chatham Island tui was once found on all the islands of the Chathams group, but these days the breeding population is largely confined to Rangatira or South East Island, with birds flying to nearby Pitt Island each winter. The tui population on the main Chatham Island disappeared over the last 30 years, but an initiative by the Taiko Trust hopes to re-establish that population. The Taiko Trust carried out a trial transfer of 14 tui in 2009, the first time tui had ever been translocated, and following the success of that trial a larger translocation of 40 birds was planned for February 2010. Alison Ballance joins Mike Bell, David Boyle, Josh Thomas and John Day on Rangatira to catch the birds, but as the Tui Team find out, getting a bird in the hand is not always an easy task. Part two of the tui story will feature next week.