Our Changing World for Thursday 19 November 2009

Before a drug can go on our pharmacy shelves, it needs to be tested in a series of clinical trials. One of the critical steps in that process is taking the experimental pharmaceutical from the lab bench and scaling it up, according to strict guidelines, so that there is enough of the drug for ingestion by human trial participants.

That's why experimental drug making facilities like New Zealand's GlycoSyn are needed. General manager Paul Benjes (above) takes Ruth Beran on a tour of GlycoSyn, but makes sure that she first protects herself and the facility from contamination. 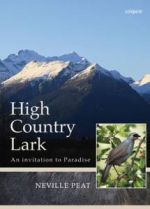 He's been Dunedin's citizen of the year, has won at the Montana Book Awards, and in 2007 was awarded the Creative New Zealand Michael King Writers' Fellowship, New Zealand's largest literary award. Writer and photographer Neville Peat has written more than 40 books, many of them concerned with the natural world, especially of southern New Zealand. He is one of New Zealand's pre-eminent natural history writers; his new book on the Tasman Sea is due to be published by Penguin early in 2010, and the most recent addition to his Lark series is High Country Lark: an Invitation to Paradise, published by Longacre Press.

In a subduction zone, one tectonic plate slides underneath another plate. It makes sense then, that fluid between these two plates would have an impact on how those plates move, and therefore the likelihood of earthquakes.

Martin Reyners from GNS Science has been studying the impact of fluid between tectonic plates using a 3D imaging technique called tomography. Perhaps counter-intuitively his results seem to show that rather than helping plates to move, fluids can actually lead to them locking up. He explains what his research may mean for earthquake prediction.

Alison Ballance is back at the Leigh Marine Laboratory, catching up with marine scientist Craig Radford, whose specialist is underwater acoustics. For the last few years he's been eavesdropping on the underwater soundscape of the Leigh Marine Reserve, using hydrophones which make automatic recordings every hour. He's found significant seasonal and daily patterns in the noise produced by reef invertebrates, and also made sound recordings that proved a 30-year old theory about which creature is responsible for the lower frequency component of the sound. He also talks about future research directions for which he has just received a Marsden Fund grant.